Flat is where it’s at 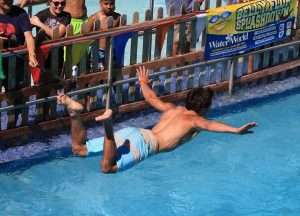 “Yes, it hurts for a minute, yet the glory lasts a lifetime!” So says shallow water stunt diver Darren Taylor a.k.a. “Professor Splash” of Colorado who began his career diving at Casa Bonita in Denver. With a dozen Guinness World Records under his belt, and appearances on America’s Got Talent, the Discovery Channel, and the History Channel, his best belly flop was successfully performed without injury from a height of almost 37 feet into a kiddie pool holding only 12 inches of water. As the most famous and experienced of the celebrity judges on hand for Water World’s 21st annual Belly Flop Splashdown, Darren offered, “There’s a lot of technical skill that goes into a well-executed belly flop.” In what might seem obvious and easily overlooked, he tells contestants that “It is important to land flat on your belly.” A slightly arched back, outstretched arms and splayed legs are also integral components. Taylor’s mottos are: “Commit to the Hit,” and “Flat is Where It’s at.”

With considerably more water to work with than Darren ever had, fifty belly floppers entered the contest with hopes of not only glory, but a handsome payday as well. First place in the men’s and women’s divisions paid $1,000 each. For second place $750 was awarded and third $500. Of the five women contestants, three of them were guaranteed richer before even diving.

Stomachs properly painted, the floppers lined up awaiting their turns from the diving block. Among the assigned nicknames were “Juicy” Jess and “Hot Sauce.” The audible plop of the flop and size of the splash weighed heavily in the scoring. The best five men and five women advanced to a final flop-off and privilege of launching from the intimidating high platform. Both competing for the second time, P.J. “Pinche” Holtzhauser of Sterling and Kelly “Pebbles” Stone from Lakewood took top honors. With prize money collected, for them, the term “No pain no gain” has never been more palpable as evidenced by the beet-red front of their torsos half an hour after belly flopping.

For more information about Water World and the Belly Flop Splashdown go to: www.WaterWorldColorado.com.

Dave Gibson has been a contributor at the Weekly Register-Call for over a dozen years. To view past articles and photos go to: www.DaveGibsonImages.com.

END_OF_DOCUMENT_TOKEN_TO_BE_REPLACED

Where the dead get to tell their story By Jaclyn Schrock On Saturday, August 21, the Gilpin Historical Society held their annual Cemetery Crawl. Tickets allowed the shuttle of hundreds of guests from the Teller House parking lot to the Cemetery. Depending on v... END_OF_DOCUMENT_TOKEN_TO_BE_REPLACED