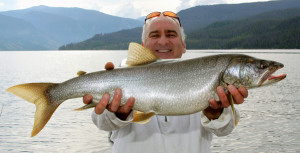 Are you tired of bait fishing for a few stocker rainbow trout? Have you grown weary of wading the local streams, navigating the slippery rocks, only hooking-up with smallish brook trout and an occasional brown? If you answered yes to either or both of these questions as I have, and are ready to catch big fish as I am, the best solution that I know of is to contact premier Colorado fishing guide Bernie Keefe.

Almost two years have passed since I last fished with Bernie. It was October then and I was promised forty spawning lake trout of between 18 and 22 inches. He delivered on two consecutive days. On that trip we were targeting numbers of fish; this time it was the massive lake trout, that Granby Reservoir is renowned for, that I sought. Requiring more skill and a little more patience, Bernie predicted eight bites and 3 to 5 “lakers” between 28 and 34 inches during a full day’s excursion.

From my campsite at Stillwater Campground, I could see Bernie backing his boat down the ramp into the reservoir ten minutes before our scheduled 6 a.m. departure. The sky just light, the water was calm and the temperature comfortable when we headed out. Situating ourselves over an underwater “hump,” on the reservoir’s bottom fifty feet underneath us, I began fishing with a gray tube jig. “Less is more,” I’m instructed as I correct to a subtler motion.

Pleasantly surprised, after only ten minutes, I had hooked my first fish! As it sped towards the surface I reeled in the line as fast as I could, but suddenly it was gone. “Try setting the hook a little bit harder next time.” was my second lesson. Not long thereafter, another fish! Being just as hefty as the first, it felt like a cinderblock while doubling my rod and stripping line to the dark depths. After a thoroughly enjoyable ten minute battle, relished by me and presumably not the trout, we netted a silvery glistening 29 inch, 9 pound, lake trout! Now this was the kind of fishing I had come for! It was the nicest freshwater fish I’d ever landed, beating my old personal record by a full pound. Although we would catch bigger, it was the gamest of the day putting forth the best fight.

Yet another nine pounder and a three pounder followed, with a few missed strikes in between. Always changing locations and strategies, Bernie pulled out a fuzzy strip of black rabbit pelt attached to a hook. The strangest lure that I’d ever seen, it looked remarkably like a fish when dragged through the water. Nearly a foot long, we slowly trolled with it behind the boat. Visible on the sonar screen, a group of sizeable fish were seen trailing the lure. I was told to start reeling, having hooked-up with a another quality trout! It came stubbornly to the net, tipping the scales at twelve pounds and stretching 31 inches! The fish’s belly bulged under its own weight as I proudly held it up for a picture. Perhaps 30 years old, it was a female and vital to Granby’s self-sustaining lake trout breeding stock. We returned her to the water as is Bernie’s policy applying to any fish over 20 inches.

To catch trophy-sized trout of your own call Bernie Keefe at (970) 531-2318 or go to www.FishingWithBernie.com.

END_OF_DOCUMENT_TOKEN_TO_BE_REPLACED

Benefitting the county, schools, and much more By Don Ireland   This year marks the 30th anniversary of casinos opening in the former little mining towns of Black Hawk, Central City and Cripple Creek, Colorado. In those early years, smoking was allowed inside ... END_OF_DOCUMENT_TOKEN_TO_BE_REPLACED