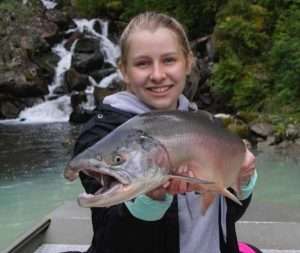 Sometimes referred to as “Alaska’s playground,” the Kenai Peninsula is a couple of hour’s drive south from Anchorage. One of Alaskans’ favorite forms of play is fishing. From angling the many lakes, rivers, and streams for salmon, trout, and grayling, to deep sea fishing for halibut, cod, and rockfish, the Kenai has something to satisfy almost any angler’s needs.

The end of May is when king salmon begin heading up the Kenai River. The Alaskan World Record king salmon of 97 pounds, 4 ounces, was caught from the Kenai River by Les Anderson in 1985. The runs don’t seem as strong in recent years, but the big ones are still out there and regularly hooked. June is the best time to fish the Kenai for king salmon. July and August are prime fishing months on the peninsula with good luck guaranteed almost anywhere. The first half of September is also often productive.

After a nightmarish 24-hour flight delay, I arrived in Anchorage at 11 p.m. and drove through the rain reaching my lodging in Soldotna at 3 a.m. I was scheduled for a fly-in trip for salmon in merely two hours, but exhausted with almost no sleep over the course of 48 hours I was physically unable to answer the bell. The fly-in part of my adventure was the day of fishing I looked forward to most and fortunately was able to be rescheduled for later in the week. Kenai and Russian River fishing along with Cook Inlet and Seward ocean fishing were also part of the quite reasonably priced package offered by Gone Fishin’ Lodge. Accommodation, breakfasts, full access to the kitchen, and fish cleaning are included.

The next day, I was finally on the water. We motored downstream and beached our boat on a jutting bend of the Kenai River in Soldotna. Pink salmon (also called “humpies” because of the pronounced hump on their backs during spawning season) were ubiquitous. Wading out from shore, we cast our spinning lures pulling in one after another pink with some of them weighing up to eight pounds. Pink salmon aren’t generally thought of as the best table fare so they were all released. Intermittently, silver salmon (coho) were landed which are good eating. Once we all had our bag limit of two silvers apiece our fishing day was over at only 11 a.m. and a group photo was taken to record the successful outing.

Following one of the finest morning’s fishing that I’d ever experienced, I drove south to the Kasilof River to explore. Fishermen with long-handled nets called dip nets were steadily hauling in salmon. To my chagrin, Alaskan residency is required to participate. Driving across the beach for a better look, the front-wheel drive Chevy Cruze rental car bogged down in the sand. Instead of asking to borrow someone’s cell phone to call a tow truck, two men who tried to push the car out offered to tow it themselves. Unable to find a sturdy place to secure the hook of the tow strap, I opened the trunk and we attached it to the latch. This worked just fine and the car was back on solid ground when I yelled “Stop!” The person I allowed behind the wheel of my rental car stopped and the guy towing the vehicle did not. Needless to say damage resulted. The trunk wouldn’t close anymore so I secured it with a bandana which left it an inch or two ajar. Two or three times a day for the rest of my vacation I was informed that my trunk was open. Tired of explaining myself and being reminded of my stupidity, I began telling them that all of the bodies wouldn’t fit. After talking Alamo into knocking $500 off the repair bill, reparations amounted to $1,300 from my insurance company and $1,300 out of pocket.

Flight delays and accidents behind me, the rest of my sojourn in Alaska went smoothly with only good fishing ahead. Seward, located near the scenic glacier-laced Kenai Fjords, fished well with limits of halibut and black rockfish pulled aboard. Anchor Point was also productive; one of the fishermen on my boat landed a 90 lb. halibut! Mine were more in the 15 lb. to 20 lb .range. On another day we fished the Russian River from a dory boat. Sockeye salmon (also known as red salmon) were our main objective. Connoisseurs and gourmands consider sockeye salmon the most flavorful salmon. In full spawning form with crimson red bodies, green gill plates, and grotesquely hooked jaws we tossed imitation salmon egg patterns into the flow hooking several of impressive proportions. A black bear pounced on dressed fish carcasses floating in the current from successful upstream fisherman.

Talon Air Service, Soldotna, AK, provided my floatplane flight across the Cook Inlet and landed in Big River Lake. Stepping out of the aircraft onto spongy ground that bobbed on the water, we boarded our fishing boats and headed towards the mouth of Wolverine Creek where red and silver salmon had gathered en masse to reproduce. Grizzly and black bears feasted on the bounty. A limit of sockeye was quickly attained by each of the party. The shore lunch prepared by our guide was superb with grilled salmon never tasting better to me. Bald eagles were more than happy to devour the scraps. The return flight over and through Double Glacier, where the wingtips seemed to almost scrape the rocky crags of ice and snow, was a spectacular end to an enjoyable morning.

My stay with Gone Fishin’ Lodge had come to an end. I had planned a day of R&R in Homer next, followed by a day of fishing in the Gulf of Alaska. Having fished there before, I knew that 25 lb. to 35 lb. halibut and ling cod as well as 10 lb. yelloweye rockfish were virtually assured. With gale-force winds and 15-foot seas forecast, no watercraft would be going out that day. During my downtime in Homer I ate nothing but seafood: three packs of smoked giant scallops from Coal Point Seafood Company, and two dozen raw oysters served on ice with lemon wedges and cocktail sauce at Jackolof Bay Oyster Company. The hot tub, taking eagle pictures, and touring the Ship Graveyard filled the rest of my time

To make up for my lost day of fishing, I scheduled another fly-in fishing trip with Talon Air Service to the same spot I’d been to earlier in the week. We were the first flight to depart and as it turned out the only flight until noon due to low visibility. Because all of the other fishermen were socked-in, we had the best spot to ourselves. Schools of salmon swirled to either side of our boat – one consisting of red salmon and the other of silvers. Although red salmon are arguably the most desirable in terms of taste, silvers are a very close second. The silver salmon at this location were bigger than the reds so we began targeting them instead of the reds. Able to sight-fish, I circumspectly chose my quarry and after an exciting rod-bending battle netted my best salmon of the trip – a 10 lb. silver salmon!

END_OF_DOCUMENT_TOKEN_TO_BE_REPLACED

Benefitting the county, schools, and much more By Don Ireland   This year marks the 30th anniversary of casinos opening in the former little mining towns of Black Hawk, Central City and Cripple Creek, Colorado. In those early years, smoking was allowed inside ... END_OF_DOCUMENT_TOKEN_TO_BE_REPLACED

Benefitting the county, schools, and much more By Don Ireland   This year marks the 30th anniversary of casinos opening in the former little mining towns of Black Hawk, Central City and Cripple Creek, Colorado. In those early years, smoking was allowed inside ... END_OF_DOCUMENT_TOKEN_TO_BE_REPLACED