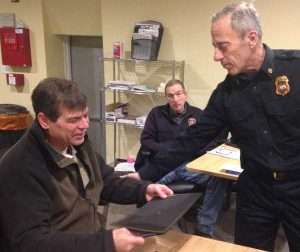 The Board of Directors for the Timberline Fire Protection District called their regular meeting to order at 7:14 pm at Station Seven at 14908 Highway 119. Member-at-large Chip Smith was momentarily delayed due to his emergency response to a distressed vehicle while in route.

After the pledge of allegiance and a moment of silence for fallen fighters, Chief Glenn Levy presented certificates of appreciation for longtime volunteer members Karmi Gazit and Dennis Whalen that are leaving the organization. Both have selflessly served the district for several years. It was noted that both have made an impressive impact, especially Whalen who has responded to 20% of total district calls during his service.

There was no public comment, correspondence/email, or legal issues to discuss. The minutes were approved from the December 10th regular meeting and the January 11 special meeting.

Treasurer Paul Ondr provided a financial synapsis. He noted that a lot of money was spent in December, all due to the approved purchase of several large items. Ondr was pleased to report that they ended the year nearly $126,000 under budget. Not only was this achieved through careful spending, planning and funds management, but also due to unexpected income that was not previously budgeted. “Our goal was to have a zero deficit budget for 2016 and this was achieved here in 2015” continued Ondr. Smith noted that he felt this was “very amazing” and needed to be celebrated. Chief Levy added that the district had some additional obstacles with this goal since it was a tough year for maintenance. “A lot of expenses were much more significant because we were doing some catchup.”

Chief Levy informed the board that he has been hard at work with his strategic plan for 2016. Survey forms have started to be handed out. The Board requested to see all this input. Levy hoped the response would “hopefully validate our service and also allow us to get better at what we’re doing. “

Levy provided a grant update. The Air Trailer specs are out for bid again so that a new vendor can compete for the project.

The CREATE grant paid for half of the recent top-of-the-line EMT class and the other half was generously donated by the High Country Auxiliary.

The Meister Foundation recently granted $5,000 for uniforms so that volunteer firefighters would no longer have to purchase their own.

Levy reported that he applied for $3,700 from the Alan Green foundation for the purpose of purchasing basic personal medical kits for each of the new and existing EMTs.

Levy will be submitting a grant request to help put Timberline’s radio equipment on the new Dory Hill cell tower. The move and required equipment updates would be about $20,000 and would vastly increase communication quality and reduce areas with no coverage. Currently this equipment is on top of Station 3 on Highway 46. Director Rik Henrikson recommended looking into the possibility of putting new equipment at the new tower at Eldora. The board also discussed that a better base radio is needed at Station 4 for the Coal Creek area.

A new request has been received from a new Firefighter One to become a resident firefighter. This would allow Station Three to have two full-time residents who would work opposite schedules. The continued growth of the resident program will help reduce response times and increase staffing. Residents are able to get the response vehicle and equipment ready while local volunteers have an opportunity to arrive at the station. Chief Levy estimates that this change will save as much as two minutes per call for that station location.

Levy informed that board that he will begin submitting articles to the local papers regarding public information and district service. He asked for ideas and guidance on possible topics that he should be certain to cover.

Levy continued, “It was an insane month in calls and administrative tasks.” A total of 51 calls were responded to, and the final 2016 budget was prepared and approved by the Board. Administration has also been working on strategic planning goals. Training has been in full force with firefighter and EMT classes. Planning has begun for future training in Wildland Fire, Hazmat, and a Firefighter Two class in 2016. Levy has been continuing to work with local agencies for collaboration and response. Timberline participated in a high-rise office building class working with Black Hawk City Fire Chief Don Taylor. Levy summarized 2015, “There were a lot of incidents, but we had a staggering amount of people respond. Phenomenal response. We are doing well and I’m proud of the organization.” Timberline had a busy year with record 544 total incidents. Levy reported that some equipment needed unexpected repairs. The Station One remodel is going very well and moving right along. “We are on track with the budget,” the Chief concluded his report.

President James Crawford noted that the Inclusion Open Season is currently in process. The season begins on February 1st and the quorum will be Saturday, February 6.

Treasurer Ondr countered the offer of $249,000 for the sale of firetruck Tender 52. This was accepted with minor modifications. The vehicle is being purchased by a company that is opening a previously closed military base in Texas.

The lease for space at the Gilpin County Public Works Shop in Rollinsville was approved by the Commissioners. The Timberline Board approved the continued contract with updated dates for the new lease period.

The Board next approved a resolution calling for the 2016 Regular District Election and appointing a designated election official (DEO). The Board approved the resolution. The terms of office for Directors James Crawford, Paul Ondr, and Richard Wenzel will expire on May 3, 2016.

The 2016 volunteer pension payment in the budgeted amount of $15,300 was approved by the Board. These funds are matched by the State.

There was no need for executive session. Upcoming meetings will be on February 22 and March 14 at Station 7 at 14908 Highway 119 (next to Taggert’s). The meeting was adjourned at 8:02 pm.

END_OF_DOCUMENT_TOKEN_TO_BE_REPLACED

Benefitting the county, schools, and much more By Don Ireland   This year marks the 30th anniversary of casinos opening in the former little mining towns of Black Hawk, Central City and Cripple Creek, Colorado. In those early years, smoking was allowed inside ... END_OF_DOCUMENT_TOKEN_TO_BE_REPLACED