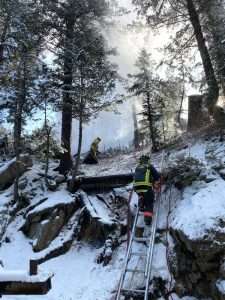 PRESS RELEASE – At approximately 3:30 a.m. On October 30, the Gilpin County Dispatch Center received a call from a resident of Pinecliffe, Colorado stating that their neighbor’s house was on fire. Timberline Fire Department was immediately dispatched and upon arrival at 120 Woodbine Drive in Pinecliffe, found the house fully engulfed inflames. Several other agencies arrived on scene to assist, including Central City Fire, Coal Creek Fire, Golden Gate Fire, Nederland Fire, and the Gilpin County Sheriff’s Office. A neighbor advised that the home may have been occupied, but due to the extremely hazardous conditions, entry could not be made into the home. When personnel were able to make entry, a deceased person was located. No positive identification of the deceased has been made.

The fire agencies were able to contain and extinguish the fire that had spread briefly to adjacent trees, however, because the home was fully engulfed upon arrival, it was a complete loss.  The cause of the fire is under investigation.

The ATF has ruled the cause of fire at 120 Woodbine Road as undetermined, however, they found nothing to indicate anything suspicious. The deceased person found in the home has presumptively been identified as Pete Wells, who was the sole resident of the home.

END_OF_DOCUMENT_TOKEN_TO_BE_REPLACED

Benefitting the county, schools, and much more By Don Ireland   This year marks the 30th anniversary of casinos opening in the former little mining towns of Black Hawk, Central City and Cripple Creek, Colorado. In those early years, smoking was allowed inside ... END_OF_DOCUMENT_TOKEN_TO_BE_REPLACED