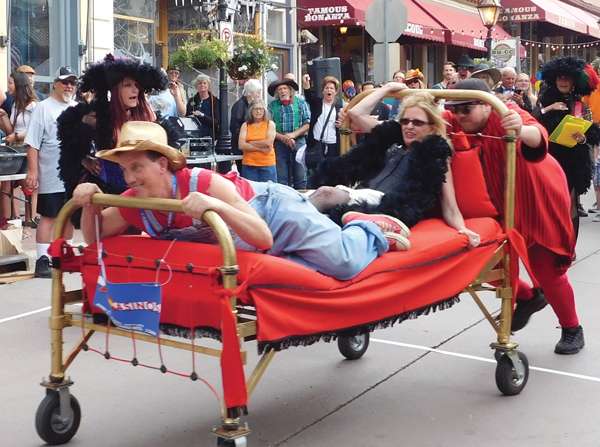 On Saturday, June 16, 2018, Central City hosted the 44th Annual Lou Bunch Day. This day honors the contribution of the madams, girls, and gentlemen callers, that helped drive the City’s prosperity and sordid history. The last madam to rule the roost on Pine Street was Lou Bunch whose name they adopted to name the event. The highlight of the day features a time trial race down and up Main Street in a large brass bed. The town’s old timers tell me they used to race this bed around the block, but changing times have whittled down the race to half of Main Street. The festival is broken into three parts; a parade of bed racers and bed race, a street dance, and a costume contest. In between, a live band entertains, street venders cash-in, the Wild Bunch shoots each other dead a few times, and sporting house girls entertain.

I’m new to the game having only seen about seven years’ worth of Lou Bunch Days myself, so I can only speak to recent history. Central City residents ache for more family-friendly events and facilities, so it is a little surprising that Lou Bunch Day is bawdy, gaudy, and a bit raunchy. The sporting house girls seem to gain worth from the ratio of bust revealed to how much is barely contained and their entertainment has been somewhat synchronized barroom dance moves. If your only exposure to Central City’s past was this day, you would think it was born on prostitution alone.

This year’s celebration however, had a different feel and focus. Perhaps it was the rain clouds, but the women were more modestly and tastefully dressed than in years past. The biggest change was the sporting house girls were not strutting their stuff during the day, but utilized for crowd control during the bed races and participated in the costume contest at the end of the day. The event kicked off with Dr. David Forsythe giving a 10-minute historical story (parsed down from 50 minutes) on the legend of Lou Bunch, and someone brought hands-on gold-panning onto the street for guests to participate in. In my opinion, this is a better focus for the City’s stated goals.

There were seven racing teams competing for prizes in times, costumes, and ages. Each team has at least one woman who stays in bed the entire time and two companions; one who pushes the bed down Main Street, and one who pushes it back up. The youngest team was the Central City Opera whose combined ages equaled 73 years. The oldest team was the Grand Z with a combined age of 144 years. The team with the best costumes, and let’s face it – there is little contest, is the Central City Opera.

An additional prize, Worst in Bed, was given to the team with the slowest time which was Main Street Central City.

Seven men entered the costume contest for best dressed gentlemen caller; otherwise known as Dandy Dans. None used their real names and I imagine historically that was mostly true as well.

Seven young ladies entered the costume contest for best dressed lady of the evening; again, I suspect they were not using their real names.

Madam of the Year

The Madams outnumbered the girls with eight entering the contest. I wonder which girl moonlighted for two madams?

On a side note, this day marked the first performance of 2018 for Central City’s Wild Bunch Gang. A powder keg of controversy was sparked earlier this year when the Business Improvement District (BID) voiced its concern about having gunfights during alcohol related events. It turns out that the Wild Bunch and their performances are much beloved in this town and City Hall was packed as the Council determined what position to take on the issue. Before the spark could ignite, calmer heads prevailed and the Wild Bunch was granted permission to perform during the summer with the exception of Stills in the Hills and the Beer Fest. The head posse of the Wild Bunch, Mike Keeler, was elated they still get to perform and excited that they get two weekends off. During the Lou Bunch festivities, the Gang gave their debut performance culminating in an all-out gunfight. Keeler was also the master of ceremonies for Lou Bunch Day, so they either used blanks during the gunfights, or it was a very convincing ghost of the man announcing the event. 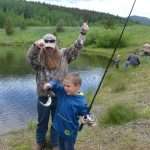 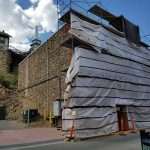