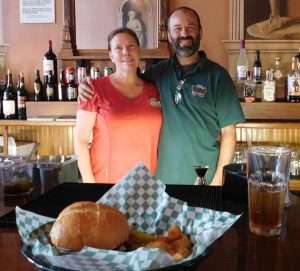 JKQ Has a Place to Call Home

Historic Central City attracts many families for its history, museums, and events, but one thing folks regularly ask is “Where can we eat that is not in a casino?” The Central casinos offer some great food, but parents of children often desire a location separated from gaming. A short drive down the hill is the Burger Joint, run by Dave and Karen Beightol, with an intimate seating area offering good, wholly organic food, but unless you hop in your car or on the Black Hawk Central City Shuttle, there are no other options… until now.

Joe and Kara Tinucci are an unassuming pair of accountants that share a love for food. Joe was working for MGM Grand Casino when a corporation merger changed the manner of business and his job became intolerable. Joe and Kara decided to use this as an opportunity to fulfill a dream and open a food truck. Kara, while pregnant with their son, continued to work for Cirque du Soleil and opened Ben’s BBQ and Smokehouse food truck with Joe in 2010. Ben’s BBQ was the eighth food truck registered in the Las Vegas area and the restaurant was a smokin’ success, winning the Las Vegas Review-Journal Best Food Truck award. The Tinucci’s came up with some innovative strategies to make the truck a viable business including catering for the Cirque’s Ka tour and partnering with Executive Chef Chris Herrin (Bread & Butter, and Meat and Three restaurants in Las Vegas) to sell their food as a pop-up restaurant before pop-ups were cool. Although it seemed they were living the dream, Joe was hit with a bomb shell when Kara told him he needed to get a “real” job. Joe is a CPA with two masters and Kara felt that his education was being wasted with Ben’s BBQ; not to mention, it was not earning enough to keep the family afloat. And so Joe looked back into the gaming world and found Gilpin County, Colorado, where he landed a job with John Zemple in Central City. Unwilling to give up the food business entirely and desiring to give money back into the community, the Tinucci’s opened Skye Cottage Bed and Breakfast on West 1st High Street. It wasn’t long after that Joe got his smoker up and running and the Tinucci’s came out of the BBQ closet to feed hungry folks during street events in Central City, Black Hawk, and beyond. They continued to offer their services as caterers to many businesses and organizations in the Gilpin area; all from the comfort of their kitchen. However, JKQ BBQ did not have a home, so when an opportunity arose to fill the Teller House year round, Joe and Kara put in their proposal and on September 20, 2018, opened the doors to the newest restaurant in Central City, JKQ BBQ inside the historic Teller House.

The Teller House has sat empty for the past 13 years, with the exception of the Opera Season, 12 weeks of summer per year. While the Opera was in session, and for a few weeks beyond, the Kevin Taylor Restaurant Group operated a 5-star, extravagant restaurant in the upper floors called Rouge and had food offerings on the lower floor where the famous face continually gazes skyward. At the end of the 2018 Opera Season, the Kevin Taylor Restaurant Group announced they would not return in 2019 and the Central City Opera Board began making plans to recruit a new restaurateur. Eric Chinn, director of properties, was instrumental in convincing the board to try leasing the Teller House during the off-season to a restaurant as a grand experiment and a request for proposal was advertised. This was the inaugural year for the Central City Opera’s Plein Air event at the end of September, and the board desired to capitalize on the momentum of continuing activity after the regular season. The Tinucci’s request stood out, coming with three letters of recommendation from three different sources. Background checks revealed that the couple have excellent reputations and Eric found no one with a criticism of the Tinucci’s. JKQ has catered for the Opera picnic the last four years and already had an established, positive relationship with the Opera. They seemed a natural fit to occupy the Teller House and so they were chosen among all the proposals. Joe and Kara still have much to prove, though, as their lease ends May 31 of 2019. For some reason, smoked brisket and coleslaw do not always meet the standards of the Opera crowd, so during their tenancy, they will develop and demonstrate dishes that show their upscale worthiness to be considered for continuing operations during the 2019 Opera Season.

The doors for JKQ opened for the Plein Air event and they continue to operate every Thursday through Sunday from 11:00 a.m. to 7:00 p.m., but their Grand Opening is yet to come. Joe and Kara desire to differentiate their Teller House menu from the street fare and are still tweaking some ideas and recipes. A seven-ounce smokehouse burger is in the works, along with a steak dinner and Funday Sunday showcasing family-style dining. They featured the steak dinner during Gilpin School’s homecoming and have had great reviews. One of the challenges is staffing the Teller House while honoring their other commitments. JKQ has contracted to provide food for the Chatfield Farms Pumpkin Patch and Corn Maze the last four years; which splits the staff between Littleton and Central City. Fortunately, the weather has benefited their juggling act, closing the corn maze and bringing Joe home for at least one Sunday. The Homecoming provided a different challenge in not being sure how busy they would be. Reservations were requested, but not required, and since the dance itself was held at the Teller House, JKQ could be overloaded. As the magical hour drew near, Aspen Cowles, an employee for JKQ, came into the kitchen to let Kara know that Central City’s Volunteer Fire Department was there to help. When Kara exited the kitchen to see how many fire fighters came by to help, she was overwhelmed to find the entire fire department (excepting those who were out of town), down to the Chief, were there to ensure JKQ was successful. Kara cannot find the words to describe just how wonderful the community in Central is, but knows that she wants to give back to that community every way she can. This is why they hire locals so that the money goes back into the community. They have four employees, including Jeff Aiken tending bar, but could really use five employees for full operations.

A new restaurant in Central City is news for celebration, but not unless the food is good. Tom Matthews tells me, “They have the best brisket I have ever had.” Jill, visiting from Chicago, said she stopped by and “the meat is excellent” and she is “very glad we stopped in.” The Mayor of Central City, Kathy Heider, ate at JKQ their opening day, and continued to come back every day that weekend. Brianna Smith, resident of Evergreen, said she and her husband go out of their way to come up to Central just for JKQ. Locals and visitors alike seem to enjoy the food lovingly prepared by Kara and Joe, and it is with great anticipation they wait to see what the full menu will offer. So if you are looking for a new place to eat in the Central City area, check out JKQ in the Teller House. You will not be disappointed.

END_OF_DOCUMENT_TOKEN_TO_BE_REPLACED

Benefitting the county, schools, and much more By Don Ireland   This year marks the 30th anniversary of casinos opening in the former little mining towns of Black Hawk, Central City and Cripple Creek, Colorado. In those early years, smoking was allowed inside ... END_OF_DOCUMENT_TOKEN_TO_BE_REPLACED