Central City Council met with Staff for a Work Session at 6:00 p.m. on Tuesday, May 21, 2019. They discussed the chipseal program for the Parkway, gaming division updates, and legislative updates.

Manager Miera began the discussion with the Central City Parkway maintenance plan stating, “The city would not be able to resurface the Parkway in its entirety without a significant sum of money.” The City sets aside about $250,000 per year for Parkway maintenance. Last year, they spent just under that amount doing some milling and overlay in areas of need. The current plan is to mill and overlay two miles per year and each segment has about a five-year life span. Director Hoover presented several options to the Council for future maintenance because the current plan will increase in cost. Hoover informed council he is witnessing about a three-percent degradation of chipseal they placed last year. Over time, the rate of decay will increase, and the Director recommends altering the plan to preserve the seal already placed and improve the integrity of the Parkway. Hoover has discussed the issues with industry experts and believes the chipseal failure is due to a couple of factors: the speeds on the Parkway and the blades on the plows for snow removal. Public Works spends $2,000 per blade and go through about four blades per year. The State uses a blade that costs $6,000 and is designed to prevent the degradation of the chipseal, but does not provide a significant increase in snow and ice removal efficiency. The life-span of those blades is about the same.

Manager Miera next reviewed some statistics from the Gaming Division on the Adjusted Gross Product (AGP) and gaming taxes collected to date for the 2018/ 2019 fiscal year. For the months of July 2018 through March 2019, Central City has increased its percentage of AGP share by 0.73% for an 8.45% share of total revenues. Tax revenues have also increased by 17.42%. Miera stated this is most likely due to an increase in business for one property owner. This is speculation as the Gaming Division does not release data for individual owners. The increases for the City are not significant enough to expect a “windfall” said Miera. Alderman Hidahl asked if they knew what percentage of the revenues was collected in the first quarter since he knows that most of the business in the gaming industry happens from June through September. Manager Miera responded that he does not have those numbers, “but can get them for you.”

Manager Miera next briefed Council on two measures in the state legislature. The first is House Bill 1327 which would add a 10% tax to sports betting revenues (must be passed by voters). In order for municipalities to take part in legalizing sports betting, they must have concurrent measures on the voting ballot. Manager Miera and City Attorney McAskin are in talks about how this would impact Central City. Mayor Fey stated sports bettings has a very narrow profit margin and Central City would not get much benefit from the measure. There could be fringe benefits of additional money flowing through town that is spent in the town. The second measure is a change to FMLA in Senate Bill 188 which would create an FMLA program that all employers would contribute. This could impact Central City even though they employ less than 50 people.

Mayor Fey led the Pledge of Allegiance and then asked for any amendments or additions to the evening’s agenda. Manager Miera asked for a change to item number nine to read, “June 7 and June 8.” This item is regarding an extension of hours for the Jazz Festival.

Mayor Fey asked if there were any conflicts of interest for any member of the council. Mayor Fey reported he had a conflict of interest in item number nine and recused himself saying, “I am involved passionately.”

The Mayor called for a motion to approve the consent agenda which consisted of the minutes from the May 7 meeting and regular bill lists through May 14. Mayor pro-tem Laratta asked about a $13,000 expense for Inland Truck Parts and Service, “I think it is kind of expensive.” Manager Miera reports that this was for repairs on a Public Works vehicle. Director Hoover added that this was for the blowers on one of their plow trucks they use on the Parkway. Laratta asked, “So it’s good for awhile?” And Hoover replied, “I hope so.” Mayor pro-tem Laratta moved to approve the Consent Agenda and was seconded by Alderwoman Johnson. The motion passed unanimously.

Mayor Fey opened the floor to the public for anyone who wished to speak to a topic on the agenda. No one chose to speak to the Council.

Attorney McAskin reviewed the second reading of Ordinance 19-04 which would repeal Article IV of Chapter 5 of the City Code in its entirety. This Ordinance refers to a development agreement with United Power which was a 10-year agreement that expired in 2016. Attorney McAskin referred to this as “a clean-up Ordinance.” United Power does not provide power for anyone in the community.

Mayor Fey opened the public forum for Ordinance 19-04, but no one chose to address council.

Alderman Aiken moved to approve Ordinance 19-04 and was seconded by Alderwoman Laratta. The Ordinance passed unanimously.

City Clerk Bechtel reviewed the second reading of Ordinance 19-05 which would amend provisions of Article VII and Article IX of Chapter 6 concerning hours of operation of Medical Marijuana Establishments and Retail Marijuana Stores. This extends the hours of operation by four hours to 8:00 a.m. to midnight. Bechtel stated that some of the owners are more concerned with the opening hours extending and are less interested in staying open to midnight, but they would like to have that option. Division Chief Ihme agreed with the City Clerk that Central City’s dispensaries are solid establishments that have posed no problems with law enforcement.

Mayor Fey opened the public forum for Ordinance 19-05, but no one chose to address council.

Alderman Aiken moved to approve Ordinance 19-05 and was seconded by Alderwoman Laratta. The Ordinance passed unanimously.

The Council next considered and extension of hours for the upcoming Jazz Festival to run though 11:00 p.m. on June 8. Mayor Fey recused himself from the discussion and decision making. Mayor pro-tempore Laratta introduced the item. The request extends the noise ordinance curfew from 10 p.m. to 11 p.m. Alderman Aiken asked if there is a deadline for the applications process that has been met. Director Ray Rears responded that the deadline for the application is 15 days prior to the event “which would be tomorrow.” Manager Miera reported that the same request was granted for last year’s event.

The Jazz Festival is scheduled for June 7 and June 8. There is a free-portion on Main Street during Saturday that runs until 5:30 p.m. A brass band procession will lead revelers from Main Street to the ticketed portion in the Teller Parking Lot.

Alderman Hidahl asked if there were any noise complaints last year. Manager Miera responded that there was one citizen who complained about the noise. The sound production from the stage will be just like it was designed last year.

Alderman Aiken asked if the Sheriff’s Office used overtime hours or if their deputies volunteer. Division Chief Ihme responded that they do not volunteer. He clarified that the event organizers pay for the extra duty.

Alderman Aiken moved to approve the request to extend hours to 11:00 p.m. each evening and was seconded by Alderwoman Johnson. The motion passed unanimously.

Stepping Up the Cost

Director Hoover introduced Resolution 19-13 which would approve a change order for the 2019 Stairway Project and authorize the City Manager to execute the Change Order. This would modify the order of rebuilding the City’s staircases from the far west staircase to the central staircase. The change order would increase the cost to $120,771, which is a $5,082 increase because the central staircase is one-foot wider than the western staircase. Work would begin in mid-August and run to mid-September.

Director Rears presented a third option for the remodeling of the Belvidere Theatre. This option will be the one contractors will follow and is based on feedback from two earlier work sessions.

Resident Mary Laffey spoke to council regarding three issues. The first was a request to honor Patty Sprague, the Postmistress in Central City whose last day is this Thursday, May 23, after many years of excellent service to the residents and businesses of the City. The second is to rename County Road Street (adjacent to St. James Methodist Church). Laffey stated the street name is confusing for people not familiar with the town and she suggested renaming to Clara Brown Street. Laffey then requested that the aforementioned street be repaved. “It is really deteriorating, and I think it is dangerous for the plows” and emergency vehicles and residents.

Mayor Fey adjourned the regular meeting at 8:09 p.m. The next regular Council Meeting will be Tuesday, June 4, 2019. 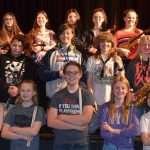 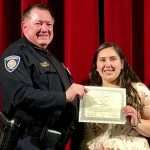