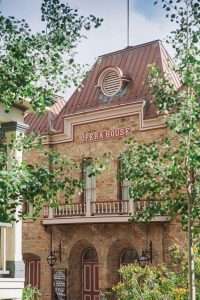 At the Central City Opera 2019 Festival

In addition to the two main stage productions, audiences have the opportunity to see two rarely performed works together as part of the Double Bill: “The Blessed Damozel” and “Litanies to the Black Virgin.” The Double Bill performances will take place July 23, 24, 31 and August 1 at St. Mary of the Assumption Catholic Church in Central City (135 Pine St.)

Patrons will experience the grand talent of opera singers who travel the country performing at top-tier venues, such as The Metropolitan Opera in New York City, and are the first to see young talent who are accepted into the competitive Bonfils-Stanton Foundation Artist Training Program. Graduates of this program continue on to perform throughout the world and receive critical acclaim.

Founded in 1932 with roots going back to the mid-1800s, Central City Opera (CCO) is entrenched in Colorado’s history and the history of performing arts in the United States and abroad. CCO is the fifth oldest professional opera company in the country and is renowned for its exquisite world-class productions, competitive and robust young artist training program, creative education programming and engaging community activities. Its annual summer festival, only 35 miles west of Denver, takes place at 8,500 feet above sea level in the Colorado mountain town of Central City, where the company owns and maintains 30 Victorian-era properties, including the intimate 550-seat jewel box opera house built in 1878. Central City Opera serves more than 40,000 students, families and seniors throughout the region through year-round programming, including live performances, educational workshops and residencies. For information, visit www.centralcityopera.org or follow CCO on Facebook, Instagram (@ccityopera) and Twitter (@ccityopera). Use the hashtags #CCO2019 and #CentralCityOpera to engage. For tickets, email boxoffice@centralcityopera.org or call 303-292-6700.

END_OF_DOCUMENT_TOKEN_TO_BE_REPLACED

Where the dead get to tell their story By Jaclyn Schrock On Saturday, August 21, the Gilpin Historical Society held their annual Cemetery Crawl. Tickets allowed the shuttle of hundreds of guests from the Teller House parking lot to the Cemetery. Depending on v... END_OF_DOCUMENT_TOKEN_TO_BE_REPLACED

Benefitting the county, schools, and much more By Don Ireland   This year marks the 30th anniversary of casinos opening in the former little mining towns of Black Hawk, Central City and Cripple Creek, Colorado. In those early years, smoking was allowed inside ... END_OF_DOCUMENT_TOKEN_TO_BE_REPLACED