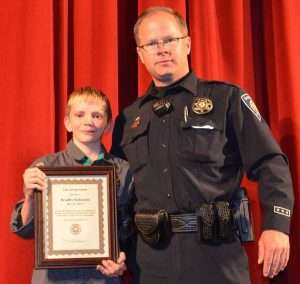 “This is the most important thing – getting done what needs to be done in class,” she said of the academic recognition.

Donaldson gave accolades to the Booster Club for everything they did all year, especially in the last month. She also called on the secondary teachers to stand and be recognized and expressed thanks to Superintendent David MacKenzie, School Resource Officer Lee Ramsey, and the Board of Education.

Cobb presented special student recognition awards to two deserving juniors. Josh Trujillo received the Colorado School of Mines Medal of Achievement in Math and Science, which came with a one-time $1,000 scholarship. Katelyn Armstrong was granted a 2017 CU Boulder Outstanding Colorado Student award, which included a scholarship of $1,000 per year for four years.

Deputy Ramsey took the podium and called student Bradley Robinson forward. Ramsey related how Bradley saved the life of a fellow student the previous week. The situation occurred on May 16 at 10 a.m. The teacher, Jessica Selseth, was down the hall addressing another student when a commotion came from the classroom – student Penn Teller was choking on a Lifesavers candy. Bradley, a real lifesaver, quickly performed the Heimlich maneuver on Penn’s abdomen, thrusting upward six or eight times until the candy popped out in several pieces.

“Bradley’s quick action likely saved Penn’s life,” Ramsey reported. “His dad said that when Bradley found out he would get an award, he said, ‘I don’t need an award. My friend has his life.”

The young man got a standing ovation as he received the Gilpin County Sheriff’s award, which stated, “For your heroic effort, swift action, and willingness to intervene in an emergency situation on May 16, 2017, and by doing so saved the life of a fellow student, we are forever grateful to you!”

Certificates were presented to students from sixth grade to junior year in high school by the teachers: Mary Farmer and Darren Newberg for sixth grade; Randi Reiner and Christopher Rouse for seventh grade; Victoria Stephens and Jessica Selseth for eighth grade, Craig Ball and Dusty Newberg for the freshman class; Rachel VanHoose and Su Henry for the sophomore class; and Jeff Schuessler and Jennifer Gillette for the junior class.

Eighth graders were awarded pins and certificates for completing the requirements for continuation to high school, pending their final exams.

“This signifies that they get to move up two flights of stairs to high school. We’re excited to have them,” Donaldson said. “I’m proud to present next year’s ninth grade class!”

Donaldson wrapped up the evening by thanking the students for their hard work and dedication.

The following students were recognized by the school, including all honor roll recipients:

END_OF_DOCUMENT_TOKEN_TO_BE_REPLACED

Benefitting the county, schools, and much more By Don Ireland   This year marks the 30th anniversary of casinos opening in the former little mining towns of Black Hawk, Central City and Cripple Creek, Colorado. In those early years, smoking was allowed inside ... END_OF_DOCUMENT_TOKEN_TO_BE_REPLACED

Benefitting the county, schools, and much more By Don Ireland   This year marks the 30th anniversary of casinos opening in the former little mining towns of Black Hawk, Central City and Cripple Creek, Colorado. In those early years, smoking was allowed inside ... END_OF_DOCUMENT_TOKEN_TO_BE_REPLACED