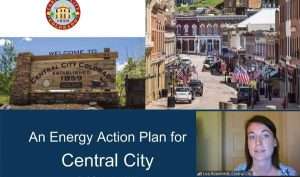 Council met with Staff for two work sessions prior to the regular meeting; one at 4:30 pm for their second budget meeting and another at 6:07 pm, minus Alderwoman Jackie Johnson and Alderwoman Judy Laratta, for a discussion on the special event regulations and proposed revisions and fees.

Back to Regular Meeting and Consent Agenda

The Mayor called for a motion to approve the consent agenda which consisted of the minutes from the September 15 meeting and regular bill lists through September 15.

Community Development Planner and Main Street Liaison Lisa Roemhildt introduced Resolution 20-35 which would adopt the 2020 Energy Action Plan and authorize the execution of Phase 2 which is implementation. There are three areas of focus to the plan: (1) connect residents with no cost and low cost opportunities to improve energy efficiency and lower energy bills, (2) implement an energy action improvement project on City properties and share lessons learned with local casinos and other key businesses, and (3) identify a cost-effective avenue for installing a publicly available EV (electric vehicle) charging station in the downtown core. Approving Phase 2 would mean the City would consider allocating funding toward the commercial goals and electric vehicle goals of the plan. Roemhildt stated there are grants available for costs associated with those goals including Charge Ahead Colorado.

Mayor Fey commented that he has been observing the EV stations in Idaho Springs and noted that out of the bank of twelve (he estimates), only two are in use at a time. Manager Miera responded that adding EV stations is like adding lanes to a highway; you do not necessarily have the traffic, but you build the infrastructure for future growth.

Alderman Aiken moved to approve Resolution 20-53 and was seconded by Alderwoman Laratta. The Resolution passed four to one with Mayor Fey voting against.

Not Taking Back Lake Gulch Road

Without explanation, Alderwoman Laratta moved to table Resolution 20-36 indefinitely and was seconded by Alderman Aiken. The Resolution passed unanimously.

Manager Miera introduced Resolution 20-37 which extends the declaration of emergency for the City through Wednesday, October 21, 2020.

Alderwoman Laratta moved to approve Resolution 20-37 and was seconded by Alderwoman Johnson. The motion passed unanimously.

Alderwoman Laratta commented that she has stayed in her home quite a bit during the pandemic and I would like to say to my constituents, “Please show up to our Zoom meetings and here in Council Chambers once we open up. I’m sick of the lack of participation.”

Alderman Hidahl commented, “I’ve put some thought to Alderman’s Aiken’s concern about cars sliding down Nevada Street. Here is my suggestion for sign verbiage, “This icy road may cost you a lot, if you get to the bottom and cannot stop.” He also stated that the City has a vested interest in the fiscal budget of the Gilpin Sheriff’s Department, and “I am convinced the Sheriff’s Department is in dire need of funding.” He would like Council to consider officially supporting Ballot Issue 1A which would add a 2.27 mill levy to raise money for the Sheriff’s Department. Hidahl would only support the resolution if the Council were unanimous in its support. Mayor Fey did not receive verbal support from all Council members and Hidahl withdrew his request.

Mayor Fey opened the floor to the public for anyone who wished to speak to the council on any items not on the agenda. Two people addressed council.

Council Candidate Kara Tinucci first thanked council for the opportunity to speak and announced her candidacy for City Council. She and her husband chose Central City nine years ago for the beauty of the area that is rich in history. She has been active in the community serving on several commissions and studies. Prior to their move to Colorado, Tinucci was employed by Cirque du Soleil in Las Vegas for 15 years in financial analysis. “My experience will be an asset in budget discussions,” said Kara. She commented that their restaurant, JKQ BBQ, gave them the opportunity to become familiar with the Central City Opera, an important asset to the community, and she has worked with the Business Improvement District organizing Main Street events.

Joe Behm, Executive Director of the Business Improvement District next addressed council saying, “Thank you for the careful and thoughtful consideration on the Budget; we don’t want to squeeze everything out of the golden goose, we need to be meeting together and be collaborative.” Behm also commented that he sent the Parkway (Central City Parkway) Speed Study to City staff and there is an opportunity to work on the Idaho Springs (Clear Creek County) section of the road.

Mayor Fey adjourned the regular meeting at 8:55 pm. There is a Work Session planned for Tuesday, October 13, 2020 at 6:00 pm for a presentation on the Trails Master Plan. The next regular Council Meeting will be Tuesday, October 20, 2020.

END_OF_DOCUMENT_TOKEN_TO_BE_REPLACED

Benefitting the county, schools, and much more By Don Ireland   This year marks the 30th anniversary of casinos opening in the former little mining towns of Black Hawk, Central City and Cripple Creek, Colorado. In those early years, smoking was allowed inside ... END_OF_DOCUMENT_TOKEN_TO_BE_REPLACED