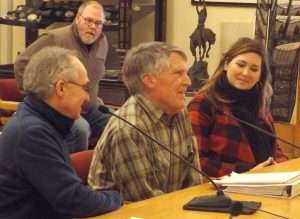 UTV for the Sheriff’s Department

Gilpin County Sheriff Kevin Armstrong presented a budget adjustment request to purchase a new Utility Task Vehicle (UTV) for the Gilpin County Sheriff’s Department. The funding is to be acquired through the Payment in Lieu of Taxes (PILT) fund in the amount of $27,000. The new UTV will replace a 1977 Tucker Snow Cat and a 2012 Polaris 800 Ranger which are currently in service at the Sheriff’s Department. Commissioner Watson commented that because the County is trying to hold appropriations to a minimum and this was not determined at budget time, in order to offset the costs of the new UTV, she suggested that the Sheriff’s Department determine  the trade-in value of the of the Snow Cat and 2012 Ranger. Ms. Watson also suggested that they add the money from the sale of the Command Van that was scheduled to be sold. With this consolidation of resources, there should be more than enough to fund a new UTV. Commissioner Engels’ comment was that this purchase was unplanned, unbudgeted, and that he was not in favor of approving this request when the County has asked other departments to hold off on vehicle purchases. The Commissioners were in favor of selling off the older assets and applying the proceeds to the purchase of the new UTV.

Gilpin County Sheriff Kevin Armstrong also discussed the problems with the new Hyper-Reach reverse 911 alert system. Armstrong stated that his office has received 27 complaints about the weather related messages from this most recent storm. The National Weather Service provides these alerts to Hyper-Reach and the subscribers agree when they sign up to receive these messages as well as the life-threatening alerts that are given out on occasion. The Sheriff’s department has no control over when the Hyper-Reach alerts are broadcasted. The subscriber does have control which messages they receive through the “Settings” screen and are able to opt out of the Weather Service alerts. There is a Press Release posted on the Sheriff’s website, on social media, and in the Weekly Register-Call this week that will contain additional information concerning this issue.

Madam Chair Isenhart opened the Public Hearing Portion of the meeting at 9:24 a.m.

Gilpin County Community Development Director Steven Strohminger presented Resolution 19-04 which is a Resolution approving Special Use Request application (SUR# 18-05) for the proposed expansion of the Eldora Mountain Resort into northern Gilpin County. The proposed Jolly Jug lift will provide access to existing runs on the front and back side of Eldora with additional intermediate and expert level of terrain on the south side of the mountain. Owner of the Tolland Ranch L.L.C., H. Wolcott Toll, agreed to lease a portion of the ranch land to Eldora for this expansion. Eldora General Manager Brent Tregaskis, Eldora Executive Assistant Hunter Wright, and Mr. Toll all spoke in favor of the Resolution. There were no comments opposed to the resolution. Gilpin County Commissioners approved Resolution 19-04 unanimously.

Senior Loss Prevention Specialist Marylin Wagner from County Technical Services Inc. (CTSI) along with Human Resources Director Susie Allen presented the 2018 Gilpin County Annual Loss Analysis to the Commissioners. Miss Wagner explained that CTSI is the operator of the insurance pool that covers liability and workman’s compensation insurance along with the County health pool for Gilpin County. In the informational report, a trend analysis of loss claims was discussed and recommendations for additional audits, training, and equipment were suggested to mitigate or prevent loss. In the last 3-5 years, Gilpin County did fairly well with a loss ratio of .78 with a 1.00 ratio as the breakeven point. This lower ratio will result in a reduction in the County’s equity contribution to about $201,000 down from $298,000 from the previous years. After a lengthy discussion, the Commissioners expressed a favorable reaction to the informational report.

Gilpin County Sheriff Kevin Armstrong presented a request to hire an Emergency Manager for Gilpin County. Sheriff Armstrong stated forty nine applicants applied for the position, six of those applicants agreed to an oral board assessment, out of the field the board narrowed these down to two candidates. Sheriff Armstrong interviewed the two remaining applicants and a final decision was made. Armstrong recommended that Nathan Whittington be assigned as the new Gilpin County Emergency Manager. Mr. Whittington has an extensive level of experience and education in both the county and the state level. Sheriff Armstrong recommended that Mr. Whittington be hired in at the 20% above the entry level pay of a Salary Grade 95 which would amount to $78,240 per year with benefits. Gilpin County will receive $33,000 from the Emergency Management Performance Grant (EMPG). State Field Manager Cory Stark advised Armstrong that Black Hawk decided not to participate in the EMPG program. This non-participation will provide additional funding of $17,500 for a total of $50,500 of EMPG funding. Sheriff Armstrong requested that the Commissioners approve the increased salary of the new Emergency Manager with justification of the additional EMPG funds and his extensive background. The County Commissioners agreed and approved the hiring of Nathan Whittington with the salary increase.

Gilpin County Treasurer Mary Lorenz presented the December Treasurer’s report to the Gilpin County Commissioners. The report shows strong numbers for the month of December with grand total of 18.3 million dollars, up from last year’s grand total of 17.4 million. Taxes collected have taken a slight percentage decrease, but this did not have an effect on the grand total. Last year’s percentage was 99.96% as opposed to 2018’ percentage of 99.98%. Gilpin Commissioners accepted the reports with no changes.

Gilpin County Manager Abel Montoya reported the Steven Strohminger will present some updates on Code enforcement. Montoya also reported they had a successful Summit that will lead to a strategic plan. There were some great outcomes that will be shared in the future in written form. The bids or Request for Proposals the County has out for the Human Services and Public Health building renovations have been extended to include a second day for walk through with the companies who wish to bid on the renovation contract. The second walk through is scheduled for March 12 at 9:00 a.m. An extension of the bid deadline will be March 26.

Once again Gilpin County Community Development Director Steven Strohminger stated the County has five total Code enforcements in 2019. Two violations have been closed out so far. One is a violation from 2018 which is a stipulation agreement which has a deadline of April 26 to be resolved. There are two other active violations in the system, one of which has until March 18 to respond; otherwise the County plans to file for a court proceeding soon after the deadline date. The other is in the Russell Gulch area in which residents are living in a shipping container. That one has until March 13 to respond.  In response to the Larsen Case in Russell Gulch, Strohminger stated that there has been some cleanup, but in the last few weeks there has been no activity on the property and the campers are all gone.

Gilpin County Resident and representative of Holistic Homestead, Arwin Ek, inquired about the proposal she e-mailed to the Commissioners about the repurposing of the Public Health Building to house the County Food Bank, and to allow Holistic Homestead to occupy that building and to provide other charitable services. The Commissioners responded that they have not received that e-mail and they are not prepared to discuss this matter.

Case Worker Supervisor Teletha Pettis presented a Memorandum of Understanding (MOU) between Gilpin County and Prowers County concerning the Child Welfare Hotline. The MOU is developed in partnership with Prowers County, with confirmation from the State for Prowers County to manage and administer calls to the Hotline regarding persons residing in Gilpin County. The MOU states that the Hotline serves as a direct, immediate, and efficient route to the counties which are responsible for accepting and responding to child and senior abuse and neglect inquiries and reports. Ms. Pettis supported the MOU stating that reporting parties are more likely to call the third party Hotline and report anonymously rather than call the Gilpin Human Services compromising the anonymous nature of the report. Gilpin County Commissioners approved the MOU unanimously.

Gilpin County Commissioners made a motion to recess into Executive Session per C.R.S. 24-6-402 (4)(a) regarding the purchase, acquisition, lease, transfer, or sale of any real, personal, or other property interest.

The next Gilpin County Commissioners regular meeting will be March 19, 2019 at 9:00 a.m. at the Gilpin County Courthouse located at 203 Eureka St. Central City, Colorado.

END_OF_DOCUMENT_TOKEN_TO_BE_REPLACED

Where the dead get to tell their story By Jaclyn Schrock On Saturday, August 21, the Gilpin Historical Society held their annual Cemetery Crawl. Tickets allowed the shuttle of hundreds of guests from the Teller House parking lot to the Cemetery. Depending on v... END_OF_DOCUMENT_TOKEN_TO_BE_REPLACED