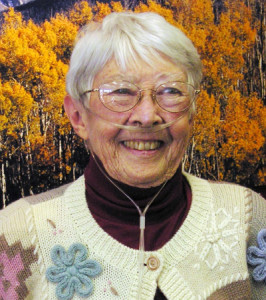 Elaine Patricia Schoelzel was born at St. Joseph’s Hospital in Denver, CO on December 24, 1926. She was the oldest child of Charles William Frank and Lona Rosella Balay Schoelzel.

Elaine attended Denver Public Schools and graduated from East High School in 1945. Over the years she remained close with several of her elementary school friends. Elaine was held back in kindergarten, a fact which bothered her for most of her life!

Elaine graduated with a degree in Fine Arts from the University of Colorado in 1949. While at CU she pledged Delta Gamma Sorority, of which she remained a very active member until the time of her death. She also became an avid skier and thus began her true and deep love of the out of doors in the Colorado Mountains.

Following graduation from CU Elaine explored her career options while traveling across the country with friends on a shoestring budget. When they ran out of money in New Orleans, Elaine returned to Colorado having realized that the field of medicine was her calling. She attended CU med school as one of three women in her class, graduating in 1953.

Upon graduation from med school, Elaine completed her residency and accepted a Fellowship in Allergy in Houston, Texas. She then opened a practice in Irving, TX, specializing in pediatrics and allergy. During this time she visited her extensive family in Denver whenever possible and spent her vacations exploring Colorado and the West. She could be seen driving up and down mountain roads exploring in her ancient Jeep named Chigger.

Exploring the outdoors led to rock hounding and lapidary endeavors, bird watching and photography. Photography naturally led to the construction of a dark room. Her urban interests included the symphony and the opera, museums, tennis, golf and volunteering in a variety of civic organizations, such as the Dallas Soroptimist organization.

In 1973 Elaine sold her medical practice in Texas and returned to her native state of Colorado, specifically Rollinsville, Colorado. She purchased the Elizabeth Placer property and the existing cabin in Northern Gilpin County. She refurbished the cabin and set down very deep roots over the next 41 years.

In Colorado Elaine practiced medicine at the Wardenburg Health Center on the CU campus and was a partner in the North Boulder Allergy Clinic. Until her retirement a succession of canine companions (Maggie, Molly and Lenny) accompanied her on the daily commute.

She retired from full time practice in 1994 and took to retirement with gusto. She was an original member of the Peak to Peak Chorale and an active member of St. James United Methodist Church (Central City). She worked hard to compile the Schoelzel family genealogy, teaching herself to use the computer to do so.

Her enduring passion was to see that Gilpin County had a modern library. She led efforts to obtain the property and funding to build what is now Gilpin County Public Library. For years she served as President of the Board of Trustees. In 2008 she personally provided the funding for a major expansion of the library. She took an active role in the project, overseeing each phase of the addition.

Elaine was an early advocate for forest health and could often be found in her woods with a chainsaw thinning, removing and splitting wood. In 1987 she became active in more organized forestry efforts in collaboration with the Colorado State Forest Service, making her property a Stewardship Forest.

An added bonus of the forest advocacy work was meeting her dear friend and ultimately her wife, Betsy Beaver. As time went on Betsy became a part of Elaine’s extended family, attending weekly Saturday lunches, holiday gatherings and many other events. Elaine asked Betsy to marry her and on Sunday, August 3, 2014 the two were married by Reverend Richard Vickery of St. James United Methodist Church in a private ceremony in Elaine’s home.

Elaine’s activities were curtailed, but by no means stopped, by the onset of COPD. Her amazing spirit kept her traveling, going to the Central City Opera, the Denver Art Museum, the Botanic Gardens, taking art classes, loving and enjoying Betsy and being with family, her many mountain friends and her Delta Gamma sorority sisters. She was a familiar sight at Roy’s Last Shot restaurant, in her wheelchair, at the local ladies’ lunch on Wednesdays – until two weeks before her death.

Elaine’s family adored her and she played an active role in raising the three children of her sister, Diane Schoelzel Wilkins, after Diane and her husband Grant were stricken with polio. Several times a year Elaine would return from Texas to visit her brothers Phil (Leah) and Wesley (Ginny) her parents, aunts, uncles and nieces and nephews. In later years she traveled weekly to Denver and/or Boulder, right up until her last illness, to have lunch with family members.

A celebration of Elaine’s life will be held on Friday, August 22, 1:00 p.m. at St. James United Methodist Church in Central City. The church address is 123 Eureka Street (directly across the street from the Opera House). A reception will follow at the church.

END_OF_DOCUMENT_TOKEN_TO_BE_REPLACED

Benefitting the county, schools, and much more By Don Ireland   This year marks the 30th anniversary of casinos opening in the former little mining towns of Black Hawk, Central City and Cripple Creek, Colorado. In those early years, smoking was allowed inside ... END_OF_DOCUMENT_TOKEN_TO_BE_REPLACED

Where the dead get to tell their story By Jaclyn Schrock On Saturday, August 21, the Gilpin Historical Society held their annual Cemetery Crawl. Tickets allowed the shuttle of hundreds of guests from the Teller House parking lot to the Cemetery. Depending on v... END_OF_DOCUMENT_TOKEN_TO_BE_REPLACED