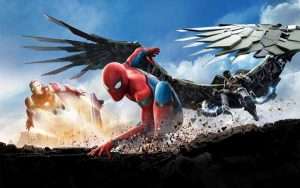 The Spider has come home to Marvel Studios after a long run with Sony Studios, in part due to the absolute disaster of “The Amazing Spider-Man 2.” So now, Marvel Studios, those putting out box-office smash one after the other, has taken the web and by all signs, created another well-loved movie.

Fresh from the big-boy Avengers fight seen in “Captain America: Civil War,” 15 year-old Peter Parker is quickly bored by the exciting bicycle thefts and purse snatchings in Queens, New York. In typical teenage fashion, Peter sends his daily text to Happy, his Tony Stark appointed handler, letting him know that he is ready to assemble. As Parker glumly fights petty crime in the neighborhood, blue-collar Adrian Toomes is gathering a gang to take what they feel is owed to them by stealing alien tech from past Avengers’ incursions with bad guys, and using it to steal cash from ATMs or robbing banks. Toomes outfits himself with a flying winged suit that earns himself the nickname Vulture. Peter feels it his responsibility to track down the thefts of alien tech against the wishes of Tony Stark and finds it is not so easy being a superhero as he thought. As he navigates the web of high-school bullying and hormonal changes, Peter must prove to Tony he is worthy to be called an Avenger.

Tom Holland. Tom is superbly cast as a teenage Spidey; Holland was 18 when filming started making him the youngest actor to portray a high-school Parker. Holland is just the right mix of misfit chatty web-slinger emulating the comic book character.

Michael Keaton. Come on, how can you not like Keaton? As a relatable bad-guy, Keaton hits this out of the park. The shrewd narrowing of his eyes transforms him from likable daddy figure to threatening mobster in a heartbeat.

Iron Man. The fact that Tony Stark came out to play in a Spider-Man movie is geekly fantastic. Downy Jr. comes across as a father figure that is fearfully straining against the title being applied to him.

Captain America. Chris Evans indeed has a few cameos in the film in his red, white, and blue spandex, providing comic relief in unexpected ways.

No back-story. Marvel assumes you either know Peter’s history of how he became a two-legged spider or it won’t matter. This allows the movie to jump right in to the current story. Also, just a veiled reference to the famous, but overused line, “With great power comes great responsibility.”

Comedy. This was a funny movie, light-hearted movie that makes you feel like life is great as you walk out – exactly what Superman should be had DC taken a different path. (Yes, had to get my DC dig in there.)

Unfamiliar territory. From the villain to the teenage crush, this movie explored new terrain for Spidey. There is no one named Osborn or Mary Jane.

Only one villain. The Vulture was the big bad and he had his own crew. The biggest mistakes of prior Spider-Man films have been to cram too many villains into one movie. With just Toomes, this movie had room to tell more story.

Invincibility. Unfortunately, one aspect of this movie and other recent Marvel movies is that the hero is invincible. We see Peter thrown against concrete walls and smashed by a falling building, yet he seems to have incredible resiliency to damage with awesome healing powers. This completely erases tension during fights because however it goes down, Peter will survive it to fight another day, or in the very next hour for that matter. DC movies have been notorious for this, but now Marvel has fallen into this same trap. I am longing for a hero that can break his bones, suffocate, or get crushed just as the rest of us could.

Crassness. High school bullying is one thing, but when it transcends reality, it becomes a real problem.

Parties and Dances. Once again, you see the exaggerated high-school party with tons of kids drinking while the parents are away, and the Homecoming Dance where shockingly every kid is dancing and partnered up. Sorry, this is not reality. It felt as if the screenwriters threw some memorable teenage events into the mix without considering, or remembering, what they were really like or when during the year they happen.

CGI. Most of the movie’s effects are top notch, but every so often, you see what appears to be a few seconds of unfinished work. Spider-Man seemed to grow or shrink from scene to scene and at times was a bit blurred. This was disappointing.

Overall, “Spider-Man: Homecoming” was a fun movie to watch. It is not perfect by any means, but it does fulfill the expectations for Marvel fans. The film is rated PG-13 for sci-fi action violence, some language and brief suggestive comments. You won’t hear Peter swearing, but there is enough in the film to be cautious with the youngsters.

Rumor has it this is the only outing produced by Marvel Studios; hopefully, Sony Studios will take notes about what worked before taking back the web. My beautiful daughter rates the film five out of five geekly (her word) t-shirts and I simply cannot ignore the issues above, so as much as I want to give it a five, I rate it four out of five motivational videos.

END_OF_DOCUMENT_TOKEN_TO_BE_REPLACED

Where the dead get to tell their story By Jaclyn Schrock On Saturday, August 21, the Gilpin Historical Society held their annual Cemetery Crawl. Tickets allowed the shuttle of hundreds of guests from the Teller House parking lot to the Cemetery. Depending on v... END_OF_DOCUMENT_TOKEN_TO_BE_REPLACED

Where the dead get to tell their story By Jaclyn Schrock On Saturday, August 21, the Gilpin Historical Society held their annual Cemetery Crawl. Tickets allowed the shuttle of hundreds of guests from the Teller House parking lot to the Cemetery. Depending on v... END_OF_DOCUMENT_TOKEN_TO_BE_REPLACED