Education on the “island continent” 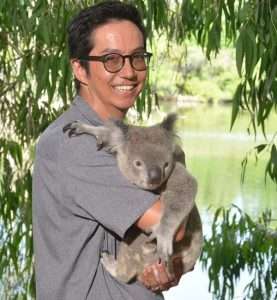 Imagine trading your job, your home, and even your car with someone else for a whole year. Then, imagine you’ll be going to the world’s biggest island but smallest continent, a land known for its kangaroos, Crocodile Hunter Steve Irwin, Vegemite, Great Barrier Reef, and “g’day mate” greetings.

It’s an environment as different from Gilpin County as can be. Yet, for most of 2017, Gilpin High School English teacher Sam Wardell and his wife Amy had the privilege of living among the Australians. Wardell went over at the end of 2016 and returned on December 27, 2017. I sat down with Wardell the other day to hear about his experience.

The Wardells were part of a group of 15 teachers from Colorado who visited Australia through the Colorado International Teachers Exchange League, a program that was formed in 1985 to facilitate exchange programs with Australia. The teachers in Wardell’s group were sent to different parts of the “Down Under” continent. He was the only one assigned to North Queensland, an area he described as the Australian tropics.

“We flew over on New Year’s Eve of 2016, visiting Bali first, because that’s where my mother lives,” Wardell explained. “We spent about ten days exploring there, then took a direct flight to Townsville, Australia, a city of about 220,000 on the northeastern coast of Queensland.”

Townsville is about an hour north of where the Wardells would be living in a small town called Ingham, which boasts a population of about 5,000. Ingham is in the shire (county) of Hinchinbrook, North Queensland. And be sure to say “North Queensland,” not just “Queensland” – they are particular about that. Located between the Tropic of Capricorn and the equator, Ingham is in the Australian tropics.

“The Great Barrier Reef is off the coast of Queensland. There’s the rainforest, the beach, reefs, frogs, parrots, and crocodiles,” said Wardell. “We arrived in what is their summer. The temperatures were in the high 30’s Celcius, which to us would be the high 80’s or 90’s, with almost 100 percent humidity.”

With all the heat and a nearby beach, one would expect swimming to be popular.

“You can swim in the ocean in the winter,” Wardell agreed, “but you can’t swim there in the summer because of the jellyfish. But there are also many waterfalls and swimming holes.”

Ingham is a sugar town. The residents have a sugar mill, grow cane year round, cut the cane from August to December, and ship it off from a jetty.

Interestingly, the heritage of folks in the Ingham area is predominantly Italian, and the area is, in fact, called the Little Italy of Australia. (Italians moved to Australia during the Depression to make a living cutting sugar cane and to get away from fascism and war.)

Wardell traded places – the whole deal, jobs, homes, and cars — with Australian teacher David Price, who taught at Gilpin’s secondary school in 2017. Price came here with his family, including his four children, who attended school at Gilpin.

Meanwhile, Wardell joined the staff at Gilroy Santa Maria College, a publicly funded private Catholic school. Despite the title of “college,” it is a secondary school, with grades seven through twelve. Nearly 400 students attend.

Wardell found the students well behaved and the staff well educated and very welcoming, with lots of young teachers. There was also a main principal, a curriculum principal, a pastoral principal (for behavior), and a religion principal.

The school is on a year-round schedule. After every ten-week quarter, the students get two weeks off. They also get off for Good Friday, Australia Day (like our Columbus Day), Anzac Day (like our Veterans’ Day), and the queen’s birthday.

The Australian school atmosphere is not as fast-paced or intense as ours. All schools are divided into subunits called houses (such as in the “Harry Potter” series). Wardell’s school had three houses. Kids are placed in classes based on their ability and desire. Grades are based on only one or two assignments per quarter, such as an essay and a speech, or “oral.” School goes from Monday through Friday, from 8:30 a.m. to 2:30 p.m., and everyone joins in morning and afternoon tea.

“Tea is just like lunch. They are always having snacks!”

Wardell taught English communication to students in seventh through twelfth grades who weren’t going to “uni” – one of Australia’s many universities.

“It’s a vocational type of English, more work-based and real-world. Most of the students were seeking to learn a trade. The trades are held in high esteem there, and they are huge on apprenticeships. It’s acceptable to drop out after year 10 if a student has an apprenticeship. The apprenticeship programs are all state-run and closely regulated.”

If a student does want to go to a university, there is a test at the end of year 12, similar to our ACT test. That test, along with their grades, determines whether they will get in and what their major will be. If they don’t have a high enough score, they have to take remedial classes. Unlike American students, Australian students go directly from high school into their chosen field of study, even if it is medical school or law school.”

Although the high school learning environment is a bit more relaxed than ours, the Catholic school has stricter behavior expectations than the public schools. Its students wear uniforms, pray in the morning, and attend mandatory religion classes. They also have a chapel on campus with masses geared to the students’ year level in school. Many parents like the higher standards of the Catholic school and enroll their children, even though they may not be Catholic.

“In Australia, people don’t send their kids to Catholic school to raise them in the faith, but as an alternative. They pay extra, $7,000 a year at most on a sliding scale.”

In addition to basic subjects, music and art programs are offered, but the only foreign language offered is Italian. The students don’t pursue competitive athletics in the same way the youth in America do, though rugby and cricket are popular and the girls are into “net ball” (similar to basketball). Instead, sports are played during after-school clubs and there are whole-school sporting carnivals. Favorite leisure activities include fishing and electronics.

“Leadership is a big thing, and there are lots of retreats and camps. Camp is for fun and bonding, while retreats, which are run by the parish priest, are more for self-reflection. During the year 12 retreat, the students wash each other’s hands to show service to each other. They also get letters from their parents thanking them for being their children.”

What about the stereotype of Australians’ usage of slang?

“They DO use a lot of slang,” Wardell admitted. “For example, an eraser is a ‘rubber,’ as in ‘pull out your rubbers.’ They do say ‘mate’ quite a bit. And it’s ‘How you goin,’ rather than ‘How are you doing?’”

And yes, Australians really do eat Vegemite, a thick, black food spread made from the leftovers after brewing beer. They enjoy it on crackers or toast with butter. Wardell likened its taste to soy sauce.

Australians also eat “tons” of fruit: mangoes, bananas, lychees, papayas, sweet potatoes, and pumpkins. Wardell clarified that every kind of squash is referred to as a pumpkin.

The delights of Vegemite and fruit notwithstanding, the number one food in Australia is fish and chips, with shops everywhere.

When Wardell was not busy teaching, he and his wife took the opportunity to travel during the two-week breaks. They did tourist things, of course – diving the Great Barrier Reef, swimming with a whale (“not planned!” he exclaimed), and spotting crocodiles.

The biggest trip was a jaunt from southernmost to northernmost Australia, from Adelaide to Darwin.

“It’s where the Indigenous live. They are not called Aborigines there. About seven or eight percent of students are Indigenous. Lots of them are on scholarships, for financial reasons and as part of social programs in order to ‘level the playing field.’”

A lengthy road trip was the Wardells’ favorite thing.

“We drove a camper van for 5,500 kilometers – and yes, they drive on the left! Sydney and Brisbane were fun. We saw the Steve Irwin Zoo near Brisbane. We went diving and saw whole varieties of fish. I must have swum under 40 waterfalls.”

Gilpin’s exchange teacher from North Queensland, David Price, has returned home also. While at Gilpin, he noted a few of his own observations.

He enjoyed the freedom of how the curriculum is taught here. “My wife believes it’s a stronger way of teaching,” he said. “We follow the British model.”

Price complimented the courtesy and maturity of the students, adding that in his opinion Australian students are a bit more frank, with a rougher type of humor.

He echoed Wardell’s observation that they are often snacking.

It was exciting for him as a tourist, taking pictures of road signs and shopping for different foods to sample.

Both teachers definitely had a different cultural experience, but they were grateful for the opportunity. No doubt, the communities of Gilpin County and Ingham were richer for what these teachers brought to their students and residents, as well.