Easter with the Lady Elks 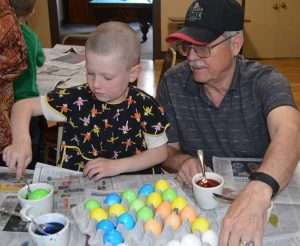 Dozens of eggs — dozens of kids!

Gilpin County kids were eggs-cited to engage in the annual egg dying and hunt at William C. Russell Park, hosted by the Lady Elks last week.   Children dipped 60 dozen eggs in hues of red, orange, yellow, green, blue, and purple at the Elks Lodge in Central City on Thursday evening, April 18. The eggs were provided by Dostal Alley Casino and Sysco and boiled by the Century Casino. Steve and Lisa Boulter of Dostal Alley helped the Lady Elks by bringing all those heavy boxes of eggs up the narrow staircase at the Elks Lodge in time for the event.

Believe it or not, it took only a few minutes to turn all those white ovals into a rainbow of colors. Parents and grandparents were on hand to help, of course, and even took the opportunity to be a kid again and splash some dye on a few eggs themselves.

The main event took place on Saturday, April 20, at Russell Park just west of Central City and included nearly 60 boys and girls. The Elks volunteers took the eggs the kids had colored the previous Thursday evening and spread them all over the hillside and playground for the kids to find. For once, the weather was warmish, with no flakes or mud on the ground and only a bit of cloud cover to cool things off. No snow boots needed.

The Easter Bunny put in an appearance, handing out candy and waving cheerily at the children. Since rabbits don’t speak, she relied on her friendly smile, furry white costume, and hand signals to do the talking.

The hunt was to begin at 11:00 a.m. sharp. Eggs-citement mounted as kids five and under waited with their parents at the playground area. Older children were poised to dash up the hill at the “go” signal.

At last, Shirley Voorhies raised her megaphone and gave the word. Eggs were snatched and grabbed from benches, swings, grass, rocks, and picnic tables with parents in laughing pursuit, trying to get that just-right photo.

Each child received a treat bag, and some plastic eggs were redeemable for special prizes.

The Elks volunteers have blessed the families of our community with these fun events for many years. Shirley Voorhies has been an active participant for 25 years, and JoAnn Kerr for 35 years. Kerr recalled that it all began even longer ago than that, so we can safely assume that it has been a Gilpin County institution for more than 40 years. There were many memories of hunts in the snow and even a time or two when the weather forced the event indoors. The women related the challenge of “hiding” 90 eggs inside the Elks Lodge just a few years back.

Voorhies said the eggs were colored with non-toxic dye. Any not found by the kiddos were safely consumable by animals.

The nice weather tempted many to stay and visit while the youngsters played on the slides and swings.

Some parents recalled coming to the egg hunt when they were little and were now bringing their own children.

“It’s the most fun we’ve had!” declared one dad.

“I had fun, too!” agreed Easter Bunny Janell Ince, finally breaking her vow of silence.

END_OF_DOCUMENT_TOKEN_TO_BE_REPLACED

Benefitting the county, schools, and much more By Don Ireland   This year marks the 30th anniversary of casinos opening in the former little mining towns of Black Hawk, Central City and Cripple Creek, Colorado. In those early years, smoking was allowed inside ... END_OF_DOCUMENT_TOKEN_TO_BE_REPLACED