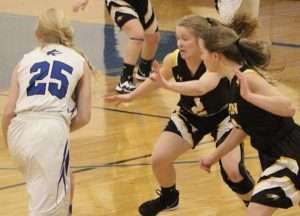 The Gilpin County High School boys’ and girls’ basketball teams played the South Park High School Burros on Friday December 20 in Fairplay, Colorado. Both the boys’ and the girls’ varsities were victorious over the Burros in Friday’s contest. The Eagle’s next game will be after the holidays against Lake County on January 7 and the first conference gamewill take place against Dawson School on January the 10th.

The Eagles boys’ varsity continues to show marked improvement in each game they play. The boy’s current record is 2-4 comprised of all non-league games.

The Burros were first on the scoreboard with a 2-point layup about a minute and a half into the game. Within a half of a minute the Eagle’s Stephen King (4) responded with a field goal for 2 points and within seconds a layup putting the Eagles up by 2 points. With 2:35 left in the 1st quarter the Burros scored a field goal followed shortly by a layup pulling ahead of the Eagles by 2 points with a score of 6 to 4. With 24 seconds left on the clock, Lindberg (24) drove through the Burros’ defense for a layup ending the quarter with a tied score of 6-6.

Less than a minute into the 2nd quarter the Burros pulled ahead of the Eagles by 2 points with a jump shot that drew a foul for 2 free throws. The Burros rebounded the second missed free throw finishing with a layup making the score 10-6 Burros. On a steal from the Burros the Eagle’s King (4) received a long pass on a fast break layup to score 2 points. The Burros responded with 2-point layup for a score of 12-8. The Eagle’s Trey Lindberg (3) quickly replied with a 3-point field goal narrowing the Burros’ lead to 1 point. Late in the quarter the Burros scored again with a layup followed by the Eagle’s Blake Boulter (25) who broke through the Burros’ defense with a 2-point layup. The Burros scored 2 more points before the half-time buzzer leaving the score at Burros 16 to the Eagles 13 to end the half.

The Eagle’s Boulter (25) made the first score of the 2nd half by sinking a 2-pointer making it a 1-point game. However, the Burros got hot with a layup and a 3-pointer pulling ahead by 6 points. Again, Trey Lindberg nailed a 3-point shot to narrow the Burros’ lead to 3 points. Nolan Lindberg (24) followed up with a 2-point field goal and a 3-point shot and King (4) completed a 2-point layup to place the Eagles up by 4 points. The Burros sunk a desperation 3-pointer with 0:01 left on the clock to close the 3rd quarter with the Eagles 25 to the Burros’ 23.

The Burros put up a valiant effort to get back in the game during the final quarter. Although they fought back to within 1 point they were unable to recover the lead as the Eagles held fast. A minute and 10 seconds into the 4th quarter Boulter (25) chalked up the first score with a 2-point layup. The Burros replied with a field goal bringing their score to 25. King (4) responded with a run of 3 layups and 1 free throw for another 7 points increasing the Eagle’s score to 34. With 3:39 left in the game Nolan Lindberg (24) made a layup but the Burros countered with 3 field goals narrowing the Eagle’s lead to only 1 point. The Eagle’s King (4) came back with a layup for 2 points and 2 free throws after being fouled during another attempted layup. The Burros completed another field goal with about 5 seconds left on the game clock to make it a 3-point game. At the Eagle’s inbound the Burros immediately fouled King for 1 and 1 free throws of which he made 1 ending the game with a score of Eagles 41 to the Burros 37.

The 1st quarter of the Lady Eagle’s varsity game started with a score by Noemi Correa (3) with a 3-point field goal. The Burros replied with 2-point layup followed by 2 Eagle’s field goals, a 2-pointer and a 3-pointer by Sarah Trujillo (5) making the score 8-2 in favor of the Eagles. The Burros, on a steal and fast break layup added 2 points. The Eagles, using a full-court press, stole the ball and made another 3-point field goal. Following a time out Trujillo (5) shot another 3-point field goal bringing the Eagles score to 14. The Eagles followed up with 2 free throws by Skyley Ramsey (12) and a layup by Jessica Wilhelm (30) ending the quarter with a score of 18-4 Eagles.

A Wilhelm (30) layup started the 2nd quarter. With 5:20 on the clock the Burros sunk a 3-pointer. The Eagle’s Abigail Smith (1) scored 2 points with a layup, which was followed shortly by 1 point from a Ramsey (12) free throw. Eagle’s Lena Warren (11) drove in for a layup and 2 points but was followed by a Burros’ fast break for 2 points making the score 25-10. The half ended with the Burros fouling Nicole Adams who completed 2 free throws for a score of Eagles 27 to the Burros 10.

A minute into the 2nd half the Burros marked the first score with a 2-point layup. The Eagles fouled twice on two Burros fast breaks resulting in 3 free throw points for the Burros. An Eagles full court press forced another turnover and a Burros’ foul on Adams (33) who completed 1 free throw bringing the score to 28-15 Eagles. Alicia Johnson (20) added two points to the Eagles tally with a layup to end the 3rd quarter.

END_OF_DOCUMENT_TOKEN_TO_BE_REPLACED

Benefitting the county, schools, and much more By Don Ireland   This year marks the 30th anniversary of casinos opening in the former little mining towns of Black Hawk, Central City and Cripple Creek, Colorado. In those early years, smoking was allowed inside ... END_OF_DOCUMENT_TOKEN_TO_BE_REPLACED