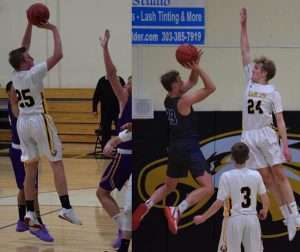 The Gilpin County High School varsity basketball team is a member of the 2A District 7 League competing against eight other regional teams. The team has played four games (all non-conference) thus far this season. With 3 losses and 1 most recent win, the Eagles have shown steady improvement in early season play.

On Saturday, December 14, the Eagles varsity boys played the Platte Canyon Huskies in an away game in Bailey, Colorado for the Eagle’s first win of the season. The Eagles were determined against the Huskies in the 1st quarter with Nolan Lindberg (#24) putting up the first score of the game with a 2-point layup 3 minutes into game and was quickly followed by a Blake Boulter (#25) 3-pointer and a Stephen King (#4) 2-point jumper. After the Huskies put two more points on the board, Trey Lindberg (#24) sunk a 3-pointer to make the Eagles 1st quarter score 10. The Huskies added another three points to bring their 1st quarter score to 6.

In the 2nd quarter the Huskies outscored the Eagles by three points, but the Eagles maintained the lead by one point. Nolan Lindberg made a free throw on a 1-and-1, followed by a short jumper to put up the Eagles first three points of the quarter. Boulter followed up with a 2-point layup. The Huskies responded with layup and a short jump shot to add four points to their score. Boulter then scored another point on a 1-and-1 free throw, but was followed by a Huskie 3 point shot making the score 16 to 13. During the remainder of the quarter Jimmy Immordino (#13) scored with a 2-point layup followed by a King 1-point free throw and closed out with another Trey Lindberg 3-point shot. The half ended with a score of Eagles 22 to Huskies 21.

The 3rd quarter went better for the Eagles who compiled 17 more points to the Huskies 9. During this quarter Boulter scored eight points, King added four points, Trey Lindberg landed another long shot for three points and Nolan Lindberg brought in another two points ending the quarter with a score of 39 to 30 in favor of the Eagles.

Nolan Lindberg opened the 4th quarter with a 2-point jump shot followed by two free throws adding four points to the Eagle’s score. The Huskies replied with a 1-point free throw. The Eagles then responded with consecutive field goals from Immordino, Nolan Lindberg and Braden Harris (#21). The game ended with a final score of Eagles 57 to Huskies 41, handing the Eagles their first win of the season.

Notable stats include: 17 points scored and 14 rebounds by Blake Boulter; 13 points scored by Nolan Lindberg and 11 points (including three 3-point shots) scored by Trey Lindberg. Over the four non-conference games played, the Eagles team has increased their field goal percentages from 29% to 36% per game, increased their rebounds per game from 33 to 39, and decreased the team’s turnovers per game from 19 to 13.

On Friday, December 13, the Eagles played a non-conference, home game against the West Grand Mustangs. The Eagles trailed the Mustangs by only one point ending the 1st quarter, two points after the 2nd quarter and again one point at the end of the third quarter. In the 4th quarter the Mustangs pulled ahead in the latter part of the quarter beating the Eagles by just nine points with a score of Eagles 41 to the Mustangs 50.

On Tuesday, December 10, the Eagles boys’ varsity hosted the Estes Park High School Bobcats in another non-conference basketball game. Again, the Eagles trailed by only one point ending the 1st quarter and by only two points ending the half with a score of 21 to 19 in favor of the Bobcats. By the end of the 3rd quarter the Eagles trailed by nine points. The Bobcats posted 16 points to the Eagle’s nine points in the 4th quarter ending the game with a score of Eagles 34 to the Bobcats 50.

On Tuesday, December 3, the Eagles boys’ varsity played an away game against the Rocky Mountain Lutheran High School (RML) Eagles. This was a non-conference game and the first Gilpin Eagles basketball game of the 2019-2020 season. The Gilpin Eagles trailed the RML Eagles by only one point concluding the 1st quarter. In the 2nd through 4th quarters RML outscored Gilpin by 3 to 4 points in each quarter ending the game with a 12 point deficit and a final score of Gilpin Eagles 35 to the RML Eagles 47.

END_OF_DOCUMENT_TOKEN_TO_BE_REPLACED

Benefitting the county, schools, and much more By Don Ireland   This year marks the 30th anniversary of casinos opening in the former little mining towns of Black Hawk, Central City and Cripple Creek, Colorado. In those early years, smoking was allowed inside ... END_OF_DOCUMENT_TOKEN_TO_BE_REPLACED

Benefitting the county, schools, and much more By Don Ireland   This year marks the 30th anniversary of casinos opening in the former little mining towns of Black Hawk, Central City and Cripple Creek, Colorado. In those early years, smoking was allowed inside ... END_OF_DOCUMENT_TOKEN_TO_BE_REPLACED