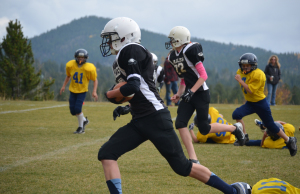 Gilpin County’s Middle School football team got their game on as they won over North Park (Walden) 44-26 at home October 10.

Rain ushered in the second half. Due to the lopsided score, Coach Clinton Wenholz allowed the younger and more inexperienced players a chance to play. North Park didn’t give up, however, and both teams scored 20 points during the second half.

The Eagles put up over 400 yards of offense.

Gilpin’s record is 5-3; the team plays its last game on Monday, October 20, against Lyons on their field.

The Gilpin County High School varsity volleyball team suffered a loss against West Grand (Kremmling) 3-0 on October 9 in an away non-conference game. The Lady Eagles’ record is 9-7 for the season, 6-4 away.

A trio of seniors led in kills for Gilpin: Alyssa Chareunsouk with 7, followed by Stephanie Siegrist with 6, and Bailey Hanssen with 2. Teammates Alex Martin, Jada Gohdes, and Sierra Deleon contributed 1 kill each.

Tops in digs for the Eagles was Martin with 19; Deleon got in 12, Chareunsouk 9, Aspen Nadeau 6, Gohdes 5, Siegrist 4, and Hanssen and Cicely Lepro 3 each.

Siegrist was first in serving received success with 14. Chareunsouk came in with 11, Martin with 10, Lepro with 9, Nadeau with 5, Gohdes with 4, and Hanssen with 3.

END_OF_DOCUMENT_TOKEN_TO_BE_REPLACED

Where the dead get to tell their story By Jaclyn Schrock On Saturday, August 21, the Gilpin Historical Society held their annual Cemetery Crawl. Tickets allowed the shuttle of hundreds of guests from the Teller House parking lot to the Cemetery. Depending on v... END_OF_DOCUMENT_TOKEN_TO_BE_REPLACED

Benefitting the county, schools, and much more By Don Ireland   This year marks the 30th anniversary of casinos opening in the former little mining towns of Black Hawk, Central City and Cripple Creek, Colorado. In those early years, smoking was allowed inside ... END_OF_DOCUMENT_TOKEN_TO_BE_REPLACED