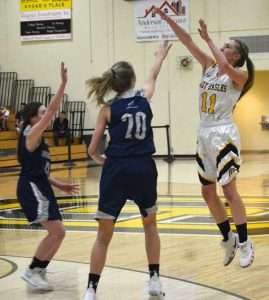 Gilpin County H.S. boys’ and girls’ basketball teams hosted the Timberwolves of Union Colony Prep of Greeley (Union) on January 18 and the Warriors of Longmont Christian High School (Longmont) on January 15. The boys emerged victorious in those league contests, vindicating themselves after losses to both of those schools during the 2016-17 and 2017-18 seasons. The girls’ team was defeated in its games, but lost to Union only 26-21.

“Our guys are playing great team basketball right now,” stated Head Coach Paul Hanson. “I’m happy for them and proud of their efforts. We are hoping to continue playing well and having fun.”

Gilpin’s league record is 4-2 so far, and they have 6 wins and 7 losses overall.

The Eagles were on fire against Union from the get-go, with #24 Nolan Lindberg shooting a 2-point field goal within the first few seconds. Teammate #11 Alex Wilhelm followed up with a 3-pointer, and #4 Stephen King added another 2 points, to bring the score to 7-0. Union responded with a 3-pointer to get on the board. By the end of the quarter, Gilpin’s lead had opened to 14-8. King set the tone for the second quarter with a 2 quick buckets. Sharp shooting, assertive defensive, and plenty of encouragement from the Gilpin cheerleaders and crowd brought the score to 22-15 at the halftime intermission.

The remainder of the game continued in the same manner, with all of the Eagles’ starting lineup scoring in the double digits. #20 Will Lorenz was the scoring leader with 12 points, a trio of Lindberg, Wilhelm, and #25 Blake Boulter followed with 11 each, and King came in with 10. Lindberg grabbed 2 offensive and 10 defensive rebounds and led in blocks with 4.

The Eagles were proud of their win against the Longmont Christian Warriors on the 15th, coming in with a 50-33 triumph. Lorenz and Wilhelm were point leaders for Gilpin in that skirmish, with 18 and 17 points, respectively. The Eagles caught 32 rebounds total.

They traveled to Denver Christian on January 22, coming in with a defeat 60-38, and to Twin Peaks Charter Academy of Longmont on January 25, losing just 58-50.

Lady Eagles on the Court

Gilpin girls have fought hard this year but have seen only one win as yet. They are hoping to improve on their situation by posting a second win soon. They came close in the battle against Union, going down only 26-21.

“The girls put in a good performance,” noted girls’ Head Coach Jeff Schuessler. “Lena Warren was outstanding on defense, and Alicia Johnson stepped up on offense. It was good to see Jessica Wilhelm back in the game. We just need to make a couple more plays to win.”

Junior Jessica Wilhelm returned after being out with a knee injury since the game against Longmont Christian on January 5, 2018. Fans gave her a glad shout-out as she took the court. Juniors Samantha Smith and Nicole Adams are on the injured list; Smith announced the starting line-up for the Union game.

Both Gilpin and Union scored only 2 points each in the first quarter. Things heated up in the second period, and by half-time the Lady Eagles led 9-8. They maintained their lead till the final seconds of the third quarter, when the Timberwolves pushed back effectively and claimed the lead to win.

The girls lost to Longmont 47-15 on January 15. Highlights for the Lady Eagles included #20 Alicia Johnson swishing in 10 points and #5 Sarah Trujillo being selected as Player of the Game, with 5 total rebounds, 2 assists, and 2 steals. #13 Madison Altman nabbed 7 defensive rebounds.

END_OF_DOCUMENT_TOKEN_TO_BE_REPLACED

Where the dead get to tell their story By Jaclyn Schrock On Saturday, August 21, the Gilpin Historical Society held their annual Cemetery Crawl. Tickets allowed the shuttle of hundreds of guests from the Teller House parking lot to the Cemetery. Depending on v... END_OF_DOCUMENT_TOKEN_TO_BE_REPLACED