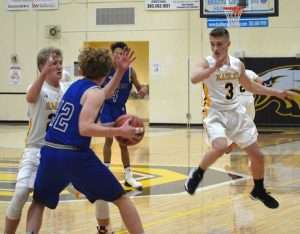 Basketball fundraiser this Sunday at the Dostal Alley

The boys’ team is having a fundraiser at Dostal Alley Brewpub & Casino in Central City this Sunday, January 20, from 6:00-8:00 p.m. All food proceeds, dine-in or carry-out, will be directly donated to the Gilpin High School boys’ basketball team and will be used for fees and lodging for the University of Colorado-Boulder basketball camp that the boys will attend in June.

At press time on Tuesday, January 15, Longmont Christian was visiting at Gilpin. The Eagles will play Union Colony Prep at home on Friday, January 18; girls play at 5:00 p.m., and the boys at 6:30 p.m.

The Eagles boys worked aggressively during a very physical match on the Gilpin home court. Personal fouls abounded and tempers were controlled with difficulty in a fast-paced and exciting contest. The Lions were looking to avenge last year’s loss to the Eagles, but it didn’t happen this time.

The season is about halfway through, with the Gilpin team sporting a 4-5 overall record. The Lyons’ team is struggling, with a 2-8 season record, 1-2 in conference play.

“This is a tough league,” noted Gilpin’s head coach Paul Hanson about the 2A Mile High League. Last year, Gilpin finished with a 6-6 league record. As for the current season, Hanson reported, “We are off to a good start in league play and are now 2-0.”

The Eagles have upped their game to be more competitive, and so far are at the top of the league along with Highland (Ault) and at the top of 2A District 7 with Highland, Dayspring Christian Academy (Greeley), and Loveland Classical.

The Eagles took command in the first quarter of the game against the Lions, racking up 19 points to the Lions’ 5. Senior #11 Alex Wilhelm nabbed the first two-pointer, and there were only 5 minutes to go in the quarter before Lyons was able to score. Sophomore #24 Nolan Lindberg shone in the second period, shooting 2 three-pointers in quick succession as the crowd roared. Senior #3 Chad Holmes also swished in a neat 3-point bucket. The score stood at 36-17 at halftime.

Lyons’ athletes rallied in the third quarter and put up 14 points, narrowing the Eagles’ lead to 41-31. They repeated that performance in the final period, but Gilpin players increased the pressure, benefitting from multiple trips to the free throw line as they were fouled while trying to shoot.

Senior #20 Will Lorenz led in scoring for Gilpin with 18, including 2 three-point field goals and 8 free throws. Lindberg followed with 12 points and Wilhelm with 11. Wilhelm, Lorenz, and sophomore #25 Blake Boulter were rebound leaders. The Eagles managed 10 steals to the Lions’ 14.

Gilpin also bested the Front Range Christian Falcons of Littleton on a snowy Friday, January 11 in home conference action, coming in with a 52-44 win. Sophomore #4 Stephen King led the Eagles with 17 points in that test. Lindberg contributed 5 blocks.

The Eagles were not so fortunate the next day against the Cornerstone Christian Bulldogs, losing 53-33 as they visited CCA in Westminster for a non-conference game. The Bulldogs boast a 10-0 overall record so far. Their prowess was demonstrated as CCA’s defense allowed only one Eagles player to score in double digits. Lorenz was top dog for Gilpin in that match with 18 points; CCA’s top scorer, Brandt Vos, also had 18 points but was helped by teammate Eddie Cruz with 15.

The Gilpin girls’ game was thrown to the Lions in a 46-13 loss on January 8. The Lady Eagles’ season is a heartbreaker so far, with a 1-8 overall record and no conference wins yet. Their rivals from Lyons are 6-4, with a 2-1 league record. The sole win for Gilpin has come against Platte Canyon.

The Lyons girls put up an effective offense and an overwhelming defense, swarming all over Gilpin with each Eagles’ ball possession. The Lions also mustered 23 steals and 6 blocks. They rubbed it in at the buzzer with one final field goal.

In other games last week, the Lady Eagles lost a close one to the Front Range Christian Falcons 20-18 and to the Cornerstone Christian Bulldogs.

END_OF_DOCUMENT_TOKEN_TO_BE_REPLACED

Where the dead get to tell their story By Jaclyn Schrock On Saturday, August 21, the Gilpin Historical Society held their annual Cemetery Crawl. Tickets allowed the shuttle of hundreds of guests from the Teller House parking lot to the Cemetery. Depending on v... END_OF_DOCUMENT_TOKEN_TO_BE_REPLACED