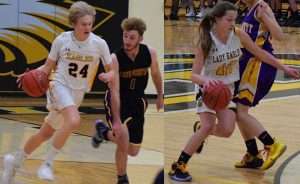 The Gilpin County School’s boys’ varsity basketball team went into the Lake County game with a 2-6 record in non-league play so far this season. Lake County was the final non-league game before the team enters the season’s league competition.

The Eagles came out strong against the Panthers in the 1st quarter. The Panthers opened scoring with a 3-point shot less than a minute into the period. Within 30 seconds the Eagle’s Stephen King (4) answered with an Eagle’s 3-pointer. In the next 2-½ minutes the Panthers had 2 field goals and a free throw while Boulter (25) added a 3-pointer for the Eagle’s producing a score of Eagles 6 to the Panthers 8. Midway into the quarter, Trey Lindberg (3) dropped in another 3-point shot to put the Eagles up by 1. The Panther’s finished the quarter with 2 more field goals and a score of 12. The Eagles polished off the quarter with 2 free throws and a field goal bringing their score to 13.

The Eagles were out-scored by 7 points in the last couple of minutes of the 2nd quarter. With 2-1/2 minutes left in the half the Eagles were still hanging on to a 2-point lead, at 18 to 16, when the Panthers got hot with a 3-pointer and 3 quick 2-point field goals to the Eagles 1 point on a free-throw. The half ended on a score of 19 to 25 in favor of the Panthers.

The Eagles started the 2nd half strongly with 3-point field goals by Boulter (25) and Trey Lindberg (3) tying the score at 25-25. Again, the Panthers had a dominant streak with 6 2-point field goals and 1 3-pointer pulling ahead of the Eagles by 15 points. The Eagles were unable to connect with any of numerous field goal attempts until the end of the quarter when Lindberg (24) landed a 2-point layup. The quarter ended with the Panthers up by 13 points on a score of 27-40.

The Lady Eagles began the 1st quarter with a full court press forcing a Panthers turnover resulting in Alicia Johnson (20) being fouled and subsequently scoring the first 2 points of the game on free throws. A little over 2 minutes into the quarter the Panthers scored their only 2 points of the period on a fast break and layup. The Eagles added 8 more points in the 1st quarter with 1 2-point field goal each by Alicia Johnson (20) and Jessica Wilhelm (30), a 3-point field goal by Sarah Trujillo (5) and a free throw by Skyley Ramsey (12).

In the 2nd quarter the Eagles defense held the Panthers scoreless till the last minute-and-a-half of the period when the Panthers completed 2 field goals to bring their game score to 6 points. The Eagles scored 17 points in the quarter with contributions of a field goal each by Johnson (20), Camryn Ganz (22), Wilhelm (30), Abigail Smith (1), Samantha Smith (2), Trujillo and Tommie DiMauro (13) who also sunk a 3-point field goal. The half ended with a score of 27-6 in favor of the Eagles.

The Lady Eagles continued to control the game in the 3rd quarter, holding the Panthers to only 4 points. With 1 field goal each from Ganz (22), Ramsey (12), and Johnson (20) and 2 field goals from Lena Warren (11) the Eagles added 10 points. The Eagles added another 5 points with free throws from Wilhelm (30), Smith (2) along with one additiona free throw point by Johnson (20).

The Eagles boys’ and girls’ varsity teams both lost their first league game on Friday, the 10th of January in Lafayette, CO against the Dawson School Mustangs. Head Coach Paul Hanson said of the boy’s game: “Our guys played very well throughout most of this game and I am proud of their effort.  They showed a lot of determination and heart, and competed well against a much more experienced team.  We started a Freshman, a Sophomore, and three Juniors versus Dawson’s five senior starters and senior bench substitutions. I strongly believe if we continue to play at that level of quality play, we will win a lot more games this season.”

In the 4th quarter the Eagles worked hard to make a 2nd come back but were unable to close the gap. The Mustangs started the quarter with a free throw and another 3-pointer increasing their spread to 18. The Eagle’s Boulter (25) finally scored with a 2-point field goal but the Mustangs answered with another 2-pointer. With just over 5 minutes left on the game clock Trey Lindberg (3) marked a 3-point shot reducing the spread to 16 points. With just over 3 minutes on the clock the Mustangs scored 2 more field goals followed by a 1-point free throw by King (4). As the clock was running down and with a 19-point deficit the Eagles went into hyperdrive in an attempt to come back. Trey Lindberg (3) and Nolan Lindberg (24) each made 2 points on free throws but the Mustangs replied with 4 points of their own. The final score was Eagles 50 to the Mustangs 69.

END_OF_DOCUMENT_TOKEN_TO_BE_REPLACED

Benefitting the county, schools, and much more By Don Ireland   This year marks the 30th anniversary of casinos opening in the former little mining towns of Black Hawk, Central City and Cripple Creek, Colorado. In those early years, smoking was allowed inside ... END_OF_DOCUMENT_TOKEN_TO_BE_REPLACED

Benefitting the county, schools, and much more By Don Ireland   This year marks the 30th anniversary of casinos opening in the former little mining towns of Black Hawk, Central City and Cripple Creek, Colorado. In those early years, smoking was allowed inside ... END_OF_DOCUMENT_TOKEN_TO_BE_REPLACED