Basketball action with Cornerstone and Belleview

The rope for climbing out of the dark cellar of last place in the 5280 League became more slippery for the Gilpin County men’s basketball team when they lost to two of the league’s lesser lights last week. The Eagles dropped games to Cornerstone Christian 56-35 and to Belleview Christian 58-37, leaving them with a league record of 1-5 and a season record of 2-13. A victory this Tuesday over Rocky Mountain Lutheran is essential, as the Eagles’ other league opponents are unbeaten and number-one in state ranked Shining Mountain and powerhouse Jim Elliot.

Failure to control the fast break was the primary cause of both losses. Cornerstone jumped out to a 25-10 half time lead as the Eagles shot badly and rebounded poorly offensively. Actually, Gilpin’s half-court defense held Cornerstone’s offense to less than 20 points, but uncontested fast breaks led to unhappy outcome of the game. Belleview capitalized on fast break layups and shot over 50% from the field in accumulating a 35-18 half time lead. The Eagles attempted a comeback in the second half, but the fast breaks kept them down too far to make any significant progress in catching up.

Freshman Chase Boulter led the Gilpin scoring with 16 points in each game. In the Cornerstone game, sophomore Dalton Dziedzic garnered 11 points, despite being guarded by Cornerstone’s all-league senior Evan Ice.

Along with the Rocky Mountain Lutheran game on Tuesday, the Eagles travel to arch-rival Nederland on Friday for a second game this season. In the first meeting between the two teams, Gilpin came very close to upsetting the Panthers at the Gilpin gym. The Rocky Mountain Lutheran game is the final home game of the season, while the remaining three games are all on the road. 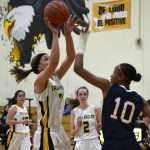 Lady Eagles win some, lose some
Leave a comment