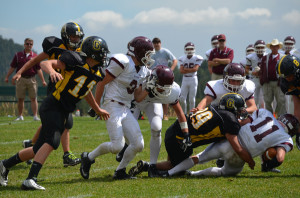 The Gilpin County High School Eagles football team clashed with the Pikes Peak Christian (Colorado Springs) Eagles last Saturday, September 6 on the home field. The final score was 20-12 in Gilpin’s first win of the season. Gilpin is now 1-2 for the season, 1-1 at home.

Head Coach Craig Ball cited the defense as key to the exciting win.

“I thought our defense was the star of the game,” Ball said. “We had three interceptions, one returned for a touchdown, and three fumble recoveries. Bjorn Tomlinson received our Defensive Player of the game — he forced two fumbles and recovered them both. I was really proud of our young freshmen stepping up also; Austin Boulter, John Immordino, and Tristan Froio all played a big role in the victory.”

Once again, the two teams held each other off in the third quarter, as neither scored.

Gilpin ruled the fourth quarter, as they scored 6 points to tie the game, then came back quickly with another TD and a two-point conversion by Matthew Immordino to make it 14-6. A third touchdown followed, with the score standing at 20-6, but PPD answered with a long run for their second TD.

Dziedzic, Chase Boulter, and Ben Mestdagh ran in the touchdowns for Gilpin.

The defense showed their strength in the game, with 93 total tackles. Dalton Dziedzic made 17 solo tackles, followed by Matthew Immordino with 11 and Austin Boulter with 10. Dziedzic also led in assists with 8, Boulter with 7, Sam Ghaffari with 6, and Tristan Froio and Bjorn Tomlinson with 5 each.

Tomlinson sacked PPCS’s quarterback twice, and Gerardo Correa also assisted in a sack, for a total of 25 yards lost by PPCS. The pair also hurried the QB a total of 7 times.

Those making interceptions were Dziedzic with 2 and John Lovett with 1.

In rushing, Gilpin had 42 carries for 105 yards; Matthew Immordino had 28 carries. The team gained 63 yards receiving.

Following the hard-fought game, the two teams knelt together in the middle of the field. Coach Ball explained, “PPCS has a prayer after each game, and they invited us to join them after the game for a bit of thanks for good sportsmanship, safety and for the game of football itself.”

Gilpin plays West Grand at the home field on Saturday, September 13 at 1 p.m.

Gilpin Middle School’s football team held off Sheridan 34-26 in its first game of the season September 3.

The Eagles scored on their opening drive in just 4 plays and continued the domination with a powerful offensive attack led by co-captain Will Lorenz.

Lorenz quarterbacked the offense to 465 total yards, passing the ball to Alex Wilhelm and Angle Gomez for several touchdowns each. Jamie Alexander smashed through the defensive line with a strong running attack.

Co-captain Jake Duncan continued the momentum, leading the defense and stifling Sheridan’s offense twice in the fourth quarter, keeping them out of the end zone when the Eagles needed big defensive plays the most.

Head Coach Clinton Wenholz commented, “I’m extremely proud of every player. They all demonstrated an exceptional amount of effort, never quitting when adversity was punching them in the mouth.”

Eagles MS team also won 44-6 in a big blowout against Lyons September 8 at home. The team had 358 yards of offense. Rushing leader was Alex Wilhelm with 186 yards. Tackling leader was Mike Wenholz with 8 tackles.

The score was 30-0 at half time. Coach Wenholz advised, “Due to the lopsided score, almost all the starters were pulled, which allowed for all the sixth graders to see more playing time.”

The team’s next game is Thursday, September 11, at home against Cornerstone Christian.

END_OF_DOCUMENT_TOKEN_TO_BE_REPLACED

Where the dead get to tell their story By Jaclyn Schrock On Saturday, August 21, the Gilpin Historical Society held their annual Cemetery Crawl. Tickets allowed the shuttle of hundreds of guests from the Teller House parking lot to the Cemetery. Depending on v... END_OF_DOCUMENT_TOKEN_TO_BE_REPLACED

Benefitting the county, schools, and much more By Don Ireland   This year marks the 30th anniversary of casinos opening in the former little mining towns of Black Hawk, Central City and Cripple Creek, Colorado. In those early years, smoking was allowed inside ... END_OF_DOCUMENT_TOKEN_TO_BE_REPLACED