Eagles have tough sledding against the Huskies and Timberwolves 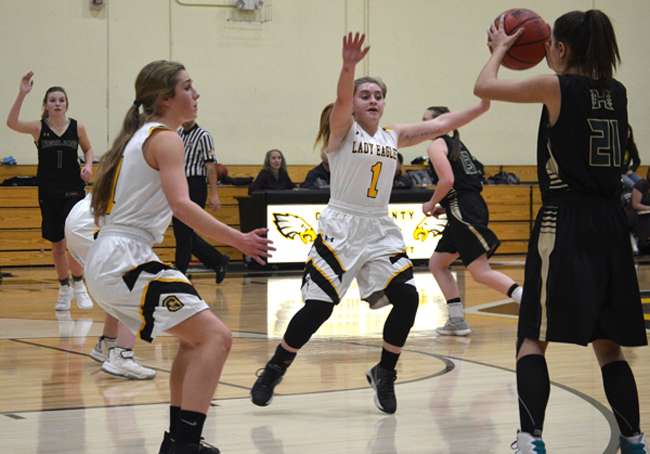 Both the Gilpin H.S. varsity boys’ and girls’ hoops squads faced defeat this past week at home and away as they battled the Highland Huskies of Ault and the Union Colony Prep Timberwolves (UCP) of Greeley. The matches called for the young athletes to keep striving, even as it became obvious that they would go down to their opponents. The fact that they continued to try their hardest during adversity proved them victors in the true sense.

The boys played Denver Academy on January 30 as the Weekly Register-Call went to press. Both teams visit Nederland on Thursday, February 1, starting at 5:00 p.m., and travel to South Park on Saturday the 3rd.

Looking at the game as a whole, Gilpin and UCP were well matched, and the score would have been extremely close except for the third quarter. The teams were tied 9-9 at the end of the first period, and Gilpin was only one point down going into halftime, with the score 15-14. It was anyone’s game. Coming back to the floor in the third quarter, though, UCP mustered 16 points, while Gilpin only shot 4. At that point, UCP led 31-18, and Gilpin couldn’t catch up. UCP shot 7 three-pointers during the game, which added considerably to their tally, and were more successful in steals, snatching 11 to Gilpin’s 3.

Even so, the Eagles put on a burst of effort in the final period with 19 points, making their rivals work for it. The Timberwolves were up to the task as they swished in 20 points and finished with the victory.

Austin Boulter shot 20 points for Gilpin, and Tanner Davis and Nolan Lindberg added 9 with 3-point field goals. As a team, the Eagles plunked in 10 free throws, had 6 assists, and 2 blocks.

The home game with the Highland Huskies (HH) posed an outside chance for Gilpin. HH is a very strong team with a 10-3 overall record and a perfect 6-0 in conference action. HH was third in the state for 2A teams last year and were expected to win in last week’s game, which they did, 69-39. Even so, the Eagles proved a challenge to the Huskies in the first quarter, as a trio of Davis, Boulter, and Will Lorenz immediately put 6 points on the board before the Huskies could holler “Mush!” John Immordino plunked in a free throw, and the score was 7-2 in favor of Gilpin. The Huskies caught up at that point, and it was tough sledding for the remainder of the first quarter as the teams stayed close.

The boys kept the fans guessing as the second quarter began. HH was not able to pull ahead significantly until mid-way through the period, when a Huskies’ 3-pointer put the score at 27-21 in their favor. It was 34-25 Huskies at locker-room time.

Gilpin struggled in the third quarter, landing just 3 points with one free throw and a 2-pointer. Meanwhile, HH shot again and again and garnered 21 points in that period. The Eagles showed heart during the fourth quarter, though, shooting 11 to HH’s 14. Overall, a good effort.

Lorenz and Davis each put up 11 points, followed by Immordino with 9, to lead Gilpin.

“We have our two best teams behind us,” noted Gilpin’s head coach, Paul Hanson. “We’re still in good shape.”

Gilpin girls went down 43-19 to UCP on the 23rd. The Lady Eagles, who started strong this season, have suffered several losses this month, winning only two of eight games. Their overall record is 5-8, and they have won one of six league matches. The UCP girls’ record is similar – a 4-7 overall tally and 2-3 in league play.

The Lady Eagles did well on steals, nabbing 13, and had 15 deflections, but they were not very successful at the basket, managing a field goal percentage of only 11. That wasn’t enough to provide competition for the Huskies, who made good on 41 percent of their shots.

Katelyn Armstrong had a good night against HH, however, leading Gilpin with 6 points, including one 3-point field goal.

Gilpin suffered a 44-18 defeat at the paws of the Huskies at home last Friday night in a conference contest. Like the boys, the girls found HH to be a pretty tough rival, with their 12-2 record overall, including a 6-0 league record.

HH was in command during the first three periods, stealing the ball aggressively and scoring with ease. To their credit, Gilpin did rally some in the fourth quarter to score 6 points to the Huskies’ 4, and the Eagles’ field goal percentage improved to 22 percent since the game with UCP.

Nicole Adams and Carly Johnson were tops for Gilpin with 4 points each. Katelyn Armstrong was the rebound leader with 7, including 2 offensive and 5 defensive. Samantha Smith contributed 3 assists and 2 steals.

The Huskies managed 3 three-point field goals and had a 60 percent success rate at the free throw line. They had 12 steals and only 7 turnovers and grabbed 32 rebounds. Laramie Woods of HH was team leader with 14 points.

END_OF_DOCUMENT_TOKEN_TO_BE_REPLACED

Benefitting the county, schools, and much more By Don Ireland   This year marks the 30th anniversary of casinos opening in the former little mining towns of Black Hawk, Central City and Cripple Creek, Colorado. In those early years, smoking was allowed inside ... END_OF_DOCUMENT_TOKEN_TO_BE_REPLACED