Eagles football gets a flying start with two wins 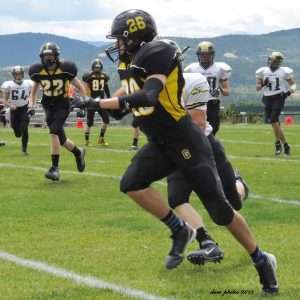 Gilpin’s gridiron athletes triumphed 52-6 over rivals Rocky Mountain Lutheran (RML) of Northglenn in a league contest on Saturday, September 5. Fans came away elated at the decisive victory, won on a bright, breezy day on Gilpin’s home field. The game followed a 30-6 win at Sanford on August 28, and Gilpin now owns a 2-0 record.

RML, whose team moniker is also “Eagles,” scored quickly in the first quarter with its only touchdown but was unable to make the two-point conversion. Gilpin’s team captain, Chase Boulter, responded with a 46-yard TD early in the second quarter, and the conversion was successful, making it 8-6 Gilpin. The Eagles never looked back, scoring a second touchdown in the second quarter, but no conversion. That brought the score to 14-6.

After halftime entertainment by Gilpin’s energetic cheerleading squad, the Eagles turned up the power, scoring 26 points in the third quarter. In a surprising move, Gilpin’s Eryk Lorenz tackled the RML quarterback in RML’s end zone for a safety and 2 points, bringing the score to 16-6. Another Gilpin TD by Bjorn Tomlinson, followed by the conversion, made the score 24-6. Two more TD’s, by Boulter and by Matthew Immordino, with good conversions, placed the score at 40-6.

The final quarter was no better for the struggling RML team. Gilpin scored again with a touchdown but no conversion. Angel Gomez ran in a 33-yard TD to make the final score 52-6.

Gilpin’s only real negative issue was penalties. The refs dinged them with 15, compared with 4 for RML, and that cost the Eagles 95 yards.

In other noteworthy plays, Tomlinson carried the ball on 7 occasions for 34 yards and one touchdown, and Gomez had one successful 35-yard carry for a TD. Lorenz contributed one safety, and Braedyn Perez mustered a 44-yard kick return.

Besides touchdowns, Boulter had 4 two-point conversions, while Immordino and Tomlinson each got 2.

Gilpin rushed for 439 rushing yards in 46 carries and also had 44 receiving yards.

Ball recalled that RML had beaten Gilpin 44-8 last year, and they were ready to return the favor. “We were really gunning for them,” he admitted. “We used a new, no-huddle offense, which made ‘em run. That was how we planned it.”

The Eagles meet Pikes Peak Christian in an away game on Friday, September 11.

Gilpin limited Sanford in away non-conference play on August 28. The score was 30-6 Gilpin. The first quarter went scoreless, and then the Eagles kicked it into gear with one TD in the second quarter. They came back after the half to score another 16 points in the third period, followed by 8 in the fourth quarter. Sanford managed one TD in the final period.

Jack Ball, Matthew Immordino, Jon Lovett, and Eryk Lorenz each ran into the end zone for TDs. Conversions were made by Chase Boulter (2) and Bjorn Tomlinson (1).

Boulter and Immordino led the rushing yardage with 125 and 105 yards, respectively, while Tomlinson followed with 72. The team had 97 passing yards, 341 rushing yards, and 97 receiving yards.

END_OF_DOCUMENT_TOKEN_TO_BE_REPLACED

Benefitting the county, schools, and much more By Don Ireland   This year marks the 30th anniversary of casinos opening in the former little mining towns of Black Hawk, Central City and Cripple Creek, Colorado. In those early years, smoking was allowed inside ... END_OF_DOCUMENT_TOKEN_TO_BE_REPLACED

Benefitting the county, schools, and much more By Don Ireland   This year marks the 30th anniversary of casinos opening in the former little mining towns of Black Hawk, Central City and Cripple Creek, Colorado. In those early years, smoking was allowed inside ... END_OF_DOCUMENT_TOKEN_TO_BE_REPLACED