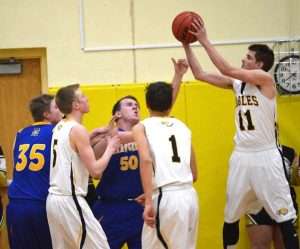 The Gilpin boys’ basketball team had their best week of the 2016 season with two hard fought wins – one over league opponent Jim Elliot 68-54, and the other over long-time rival Clear Creek 63-44. The win over Jim Elliot, last season’s fourth place in the 1-A state tournament finisher, raised the Eagles’ 5280 League mark to 2-0.

Matt Immordino, returning to the starting lineup after skipping the Clear Creek game because of injury, was the hero of the first half of the Jim Elliot. Immordino canned 11 of his 17 points to give the Eagles a 38-29 point halftime advantage. The Eagles had their biggest scoring advantage in the second quarter, but the Warriors would not go away quietly. Gilpin won the second half by only 5 points.

It was the Eagles’ outstanding swarming defense that ultimately won the game. The Warriors’ Dreyson Robertson, a 6’3” center, penetrated the Eagles lane defense for 10 points in the first half. But when Eagles freshman guard Will Lorenz entered the game in the second half, Robertson’s scoring stopped. Lorenz stayed between him and the ball, and Robertson made only 2 more points from the field. A similar effort by Chase Boulter stopped the Warriors’ leading scorer, Connor Bogner, with only 12 points from the field, six by 3-pointers.

The Clear Creek victory came much more easily. The Golddiggers, a young team, played valiantly, but the bigger and more experienced Eagles simply overwhelmed them. The press defense caught the Golddiggers in several full-court traps in the second quarter, and Gilpin rode a 19-8 quarter into a 37-20 half time lead. The game was more even in the second half, as Coach Paul Hanson emptied his bench and let all of the boys in uniform get into the game.

Boulter was the only scorer in double figures with 28 points, but eight other players scored, and three had 8 or 9 points. The scoring spread was especially satisfying, as Immordino was unable to play because of a practice injury.

The Eagles will face a stiff test on Tuesday as they meet the Shining Mountain Lions at home at 7 p.m. Their other game this week will occur on Friday at Belleview at 5:30 p.m.

END_OF_DOCUMENT_TOKEN_TO_BE_REPLACED

Where the dead get to tell their story By Jaclyn Schrock On Saturday, August 21, the Gilpin Historical Society held their annual Cemetery Crawl. Tickets allowed the shuttle of hundreds of guests from the Teller House parking lot to the Cemetery. Depending on v... END_OF_DOCUMENT_TOKEN_TO_BE_REPLACED

Benefitting the county, schools, and much more By Don Ireland   This year marks the 30th anniversary of casinos opening in the former little mining towns of Black Hawk, Central City and Cripple Creek, Colorado. In those early years, smoking was allowed inside ... END_OF_DOCUMENT_TOKEN_TO_BE_REPLACED