Eagles’ FB kicks off a win against Soroco 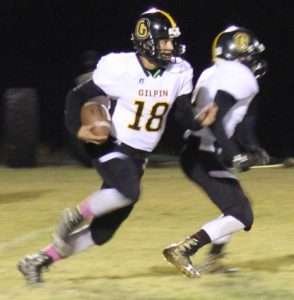 The Gilpin High School varsity football team pushed past the Soroco Rams of Oak Creek 48-40 on October 6 in a conference game on the Rams’ field. The Gilpin Eagles are having a good season, with a 5-1 overall record to date. The Eagles are second in the Northwest 8-man football league behind undefeated West Grand, whom they will visit on October 27. Soroco is now third, with a 4-2 record.

“It was an exciting game. They have a superstar on their team, but it is hard to win games when you rely on one player for most of your yards,” Gilpin’s head coach Craig Ball said. “We had a balanced attack, with four players scoring, two players throwing touchdown passes, and two receivers catching TD passes. In the end, we were in better condition. We scored 34 points in the second half…that was the difference.”

#19 senior Austin Boulter was Overall Player of the Game for Gilpin, with 1 fumble recovery for 35 yards, 11 tackles including 1 tackle for a loss, 179 yards rushing, 119 yards passing, 1 rushing touchdown, 2 touchdown passes, and 3 rushing conversions.

#12 senior Jack Ball was Offensive Player of the Game, with 175 yards from scrimmage and 3 TD receptions.

#47 senior Josh Trujillo was Defensive Player of the Game, with 9 solo and 10 assisted tackles, including 2 tackles for a loss, 1 interception returned for 25 yards, and 3 passes defended.

#18 freshman Stephen King was Special Teams Player of the Game, with 6 kickoff returns for 178 yards.

Jace Logan was the standout for Soroco, completing 4 passes for 53 yards, rushing for 349 yards, making 17 solo and 6 assisted tackles, and scoring 5 touchdowns and 2 conversions, for a total of 34 points. The Eagles were able to contain Logan and wear him down enough to edge past the Rams for the win.

The Rams scored early on with 2 TD’s in the first quarter, but the Eagles flew by to lead 14-12 in the second quarter. Soroco scored again with a 40-yard TD pass at the buzzer to finish the half at 20-14.

Soroco led off the second half with another touchdown, but then Gilpin got its game on with 2 touchdown passes by Boulter to teammate Ball. Early in the fourth quarter, though, the Rams returned a kickoff for a TD and then scored again with a 75-yard TD play to tie the game at 40-40. Gilpin quickly scored a TD by #45 senior Manny Gomez, followed by the 2-point conversion, and the game was decided 48-40 for the Eagles.

Gilpin gained 547 yards during the game.

Gilpin’s varsity Lady Eagles overwhelmed the Kiowa Indians in home non-conference play on October 6. In a five-set endurance contest, Gilpin came away with the 3-2 win. This brings the Lady Eagles’ season record to 10-5, 5-3 in league play. Kiowa has a record of 8-8 overall, with a league record of 2-2.

The Eagles players proved themselves superior in the digs department, with 55 digs, 20 by Aspen Nadeau. Kasen Nelson was first in kills for Gilpin with 15, followed by Alex Martin with 12. Cicely Lepro helped Gilpin with 4 serving aces; Bailey Hobson-Kroll and Sarah Trujillo came in with 3 each. Lepro also had 35 ball handling assists, and Nadeau received 23 serves.

The Eagles were not as fortunate as they lost 0-3 to the Union Colony Prep Timberwolves (UCP) of Greeley on October 5 at home. The Timberwolves’ record is 13-3 overall, including 7-1 in league play.

Gilpin’s varsity put up a tough fight against UCP, either staying ahead or tying through the first several volleys in the first set. Then the Lady Eagles made a series of plays where they kept hitting the ball into the net, allowing their opponents to open up a 5-point lead and rattle the Eagles’ cage. Finally, Gilpin’s players regained their poise and caught up until the score was tied 20-20. UCP pushed to take the lead once again and end the set 4 points ahead of Gilpin.

The second was a toss-up until the teams got to about 13 points; then, UCP began to wear down the Eagles and consistently scored until they won 25/16. The third set was played in similar fashion, staying close until about 12 points. The Timberwolves opened up a 6-point lead, with the score at 21-15, when there was confusion over the point totals. Several times, the scoreboard showed points being added and then taken away from either team; finally, the scorekeepers settled on 23/17 in favor of UCP, who went on to win 25/17.

Gilpin hosted the Heritage Christian Eagles (HC) of Fort Collins on October 3, coming out with a 3-1 win in that conference test.

Gilpin’s team came in with 34 kills, Alex Martin leading with 17. Courtney Holmes was tops in serving aces with 3 of the team’s total of 10. The Lady Eagles did well on blocking, Nicole Adams contributing 5 solo blocks and 1 assisted block. Aspen Nadeau helped the team with 12 digs out of 33 total. Lepro got 19 assists. Of 50 serves received by the team, Nelson and Martin received 14 apiece and Nadeau received 13.

The team will play Denver Christian at home on Thursday, October 12, beginning at 5:00 p.m.

END_OF_DOCUMENT_TOKEN_TO_BE_REPLACED

Benefitting the county, schools, and much more By Don Ireland   This year marks the 30th anniversary of casinos opening in the former little mining towns of Black Hawk, Central City and Cripple Creek, Colorado. In those early years, smoking was allowed inside ... END_OF_DOCUMENT_TOKEN_TO_BE_REPLACED