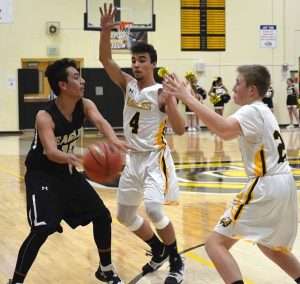 The Gilpin Eagles boys’ and girls’ high school varsity basketball teams faced the Rocky Mountain Lutheran Eagles (RML – Denver) in action-packed Gilpin home games on Wednesday, November 28. The Lady Eagles lost to RML 29-26, while the Gilpin boys came in with a 70-61 defeat. Both of these non-conference games were well played, and the teams and coaches are looking forward to good seasons.

RML came out on top 70-61 in the November 28 contest, but the Eagles players had a very good game, which looks promising for the season ahead. Gilpin has several players able to shoot in the double digits and some skilled younger players coming up through the ranks.

“I thought we did some great things on both offense and defense,” Head Coach Paul Hanson reported. “We showed moments of greatness but just need to work on being more consistent in all of our offensive positions. We scored a lot of points without even having a great shooting night, so that makes me very optimistic that we can be an explosive team.

Hanson was pleased with the distribution of scoring among the players.

“Although we didn’t get the win, we have the potential to be a great team, and I hope to compete well once league play starts in January,” Hanson said.

RML drew the first score of the game. Then Gilpin’s Alex Wilhelm shot the first of his 3-pointers. It wasn’t long, and the Eagles quickly — and briefly — seized a 7-5 lead with a couple more baskets. RML then unleashed a press that helped them breeze past Gilpin 14-7. RML put up 6 more points with some sharp shooting and a turn at the free throw line. The Eagles’ Wilhelm and Vernon Carter brought the tally to 20-15 RML to conclude the first quarter.

Gilpin cheerleaders and supporters encouraged the Eagles players to fresh effort in the second period. Carter, Stephen King, and Will Lorenz started off with 2-pointers, giving Gilpin a 21-20 lead. RML responded with a 2-point shot, but Gilpin’s Nolan Lindberg tied it up at 23-23 and then put up another 4 points for a 27-23 lead. RML made good on 2-point and 3-point shots, but Gilpin took the lead again. RML’s Josh Bachica was fouled and tied the score at 30-30. From there it was Gilpin in front, ending the half at 35-30.

The Eagles managed to hang on to the lead or keep the score tied through much of the third period, forcing RML into multiple turnovers. The tide turned in RML’s favor, though, and with less than 3 minutes remaining in the quarter RML was ahead 49-41. Lorenz kept Gilpin in the game with three 2-pointers. The teams kept up good momentum until the game was tied 60-60 with just a couple of minutes remaining. At that point, RML surged ahead with several field goals. Gilpin fouled RML’s Logan Glowicki and Niko Roybal, who both added to their team’s tally.

Lorenz led Gilpin in scoring with 16, followed by Carter with 15 and Lindberg with 11. Wilhelm got off three 3-point field goals. Lindberg led in rebounds with 7 offensive and 4 defensive of the team’s total of 26. Lorenz and Carter each came in with 5 assists, and Carter and Lindberg led in steals with 4 each. Lindberg also had 3 blocks. Wilhelm, Lorenz, and Blake Boulter helped the team’s defensive effort with 3 deflections each.

RML got off to a quick lead in the first quarter, racking up 9 points to Gilpin’s 2. The Lady Eagles began to catch up with a couple of free throws by Alicia Johnson. The second quarter began at 9-4 RML. Gilpin started to make some plays, scoring a quick basket and four free throws by Nicole Adams. RML watched their lead shrink to 12-10 with less than four minutes until halftime. The RML team swished in a couple of 2-pointers, but Johnson was fouled and made good on two free throws. The score at the half was 16-14 RML.

RML was barely able to hang onto its lead in the third quarter. As Gilpin fans hollered approval, the Lady Eagles maintained a sharp defense and pushed to within 1 point of their rivals. The score was turned briefly to 22-21 in Gilpin’s favor early in the fourth period, when Johnson hit a couple of free throws. RML quickly tied it up with a free throw by senior Grace Sievert. Gilpin grabbed a 26-25 lead with less than 5 minutes in the game, but RML edged past at the free throw line, and the final result was 29-26 RML.

Madison Altman was honored as Gilpin’s Player of the Game against RML. She played a fierce defense, blocking shots and knocking away passes to garner 10 deflections, the most of any player on either team.

Johnson and Adams shared as point leaders for Gilpin with 10 each.

END_OF_DOCUMENT_TOKEN_TO_BE_REPLACED

Benefitting the county, schools, and much more By Don Ireland   This year marks the 30th anniversary of casinos opening in the former little mining towns of Black Hawk, Central City and Cripple Creek, Colorado. In those early years, smoking was allowed inside ... END_OF_DOCUMENT_TOKEN_TO_BE_REPLACED