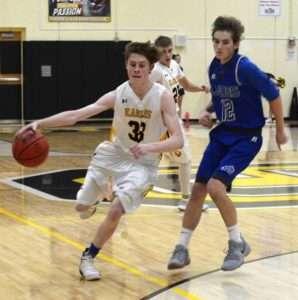 Gilpin girls boxed out by Lions and CCA Bulldogs

Gilpin’s varsity hoops athletes scored a second season home win on Tuesday, January 9, when they defeated the Lyons Lions 58-43 in a conference battle. The Eagles are now 2-6, 1-1 in conference play. Lyons has a similar record: 3-6 overall, 1-2 for league work.

Join the fans as Gilpin boys’ and girls’ squads host the Heritage Christian Eagles of Fort Collins on Friday, January 19, starting with junior varsity matches at 4:00 p.m., girls’ varsity at 5:30, and boys’ varsity at 7:00.

The Eagles put in an aggressive game. Gilpin started off with a quick basket by Tanner Davis, followed by Austin Boulter stepping to the free throw line to shoot 2. Alex Wilhelm chipped in another 2-pointer. The Lions began to catch up at that point and even take the lead by 3. After some back-and-forth, the teams were tied 13-13 going into the second quarter.

That period made the difference for the Eagles, who scored 20 points to Lyons’ 8. Will Lorenz swished in a 3-pointer to set up a Gilpin advantage, then made good on 2 free throws and followed up with another 3-point field goal. Several Gilpin players contributed 2-pointers or had success on free throws.

The teams were closely matched throughout the second half, with Gilpin racking up a total of 25 points and Lyons coming in with 22. Although the Lions had a fair bit more success on 3-point field goals (shooting 8 to the Eagles’ 3), they hurt their efforts with 19 turnovers and 20 fouls, giving the Eagles a chance to pad the scoreboard at the free throw line. Gilpin was also more successful in steals than their rivals with a total of 12, including 5 by Davis and 4 by Chris Burtschi, compared with just 5 total for Lyons.

Head Coach Paul Hanson advised that the Lyons game was the first match with a team in both Gilpin’s league and district.

“We’ve played teams with winning records so far. We’re doing well, and I think we can make some noise yet,” he commented.

Lorenz led the Eagles with 13 points, followed by Wilhelm with 12 and Davis and Boulter with 11. John Immordino helped with 6, Burtschi with 4, and Nolan Lindberg with 1. Lorenz shot 3 three-point field goals. Boulter was tops in rebounds with 19, including 7 offensive and 12 defensive. Gilpin grabbed a total of 16 offensive and 28 defensive rebounds.

Gilpin was unsuccessful in its bid for a win against the Cornerstone Christian Academy Bulldogs of Westminster, going down 55-37 in an away non-league game on Saturday the 13th. Davis was first in Eagles’ scoring with 13, while Boulter was rebound leader with 10 total. Boulter had 6 steals, with Lindberg and Davis coming in with 2 each.

Gilpin’s girls had a tough go against the Lyons Lions on January 9, suffering a 31-9 loss in this home conference contest. The Lady Eagles boast a 4-4 overall tally, 1-1 in conference play. The Lyons girls are 5-4, 1-1 conference.

The Lyons team had a height advantage and were assertive with steals and accurate in their shots. Gilpin struggled with a low field goal percentage, shooting only 15 percent, while their opponents were successful 33 percent of the time. Gilpin also had a rough time keeping up with the Lions’ 21 steals, and the Lady Eagles turned the ball over 35 times. Gilpin was also handicapped by the loss of Jessica Wilhelm, who sustained a knee injury in the game against Longmont Christian on January 5.

Gilpin did get in 10 steals, including 3 by Samantha Smith. The team had 16 deflections, including 4 by Cicely Lepro, who was Gilpin’s scoring leader with 5.

The Lady Eagles took a 41-27 loss to Cornerstone Christian Academy away on January 13.

END_OF_DOCUMENT_TOKEN_TO_BE_REPLACED

Where the dead get to tell their story By Jaclyn Schrock On Saturday, August 21, the Gilpin Historical Society held their annual Cemetery Crawl. Tickets allowed the shuttle of hundreds of guests from the Teller House parking lot to the Cemetery. Depending on v... END_OF_DOCUMENT_TOKEN_TO_BE_REPLACED

Benefitting the county, schools, and much more By Don Ireland   This year marks the 30th anniversary of casinos opening in the former little mining towns of Black Hawk, Central City and Cripple Creek, Colorado. In those early years, smoking was allowed inside ... END_OF_DOCUMENT_TOKEN_TO_BE_REPLACED