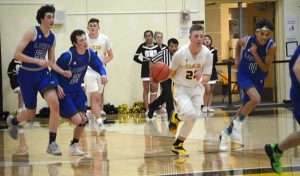 The Gilpin Eagles boys’ varsity basketball team took a loss in their home playoff game to the Lyons Lions 63-57 on Wednesday, February 20. That game was part of the first round of the 2019 2A District 7 tournaments, and the Eagles went into the match seeded fourth. If Gilpin had won, they would have taken third place at regionals. Head Coach Paul Hanson said that had never happened at Gilpin before and would have been history-making.

The Eagles finished with a 6-6 league record and were 8-12 overall.

There was positive news to remember.

“Although we didn’t get the win tonight, I’m proud of our guys for putting themselves in good position to make a post-season run by winning a bunch of games in the toughest 2A league in the state,” Hanson reported, “especially considering we are one of the smallest 2A schools in the state. We were 1A up until a couple of years ago. Also, I think it would be good to recognize that our seniors have been a part of 37 varsity wins in their four-year span, which is more varsity wins by a Gilpin boys’ team in that time span ever.”

Lyons went on to play Highland in the District 7 semifinals on February 22, losing 64-30. Highland captured the championship on February 23 when they won 79-46 against Dayspring Christian Academy. Heritage Christian ended up in the third place birth, defeating Lyons 58-44.

Gilpin beat Lyons 52-45 just last month in a rough-and-tumble home conference test and also bested them the previous season. The Lions came roaring back in an in-your-face style during the playoffs, and the Eagles had to follow suit in order to keep up.

Gilpin’s Nolan Lindberg quickly scored first with a 3-point field goal, teammate Alex Wilhelm following with 2. Lyons’ Aiden Christiansen was fouled and tied the game at 5-5. Lyons then hit a 3-pointer. Eagles’ Blake Boulter shot 3 points to tie at 8-8. The Lions scored again and from that point maintained the lead, pulling ahead significantly in the second quarter. The teams tied in scoring during the third period.

The teams held nothing back, playing fast, aggressive ball to the accompaniment of their noisy fans. Lyons had a good night at the hoop, with senior Tristan Chavez hitting 100 percent of his field goals and free throws and racking up a total of 14 points. Chavez’s teammate, senior Colton Jonjak-Plahn, also put up 14. The Lions nabbed 7 steals and were able to smack the ball away repeatedly as Gilpin players attempted to score close to the basket. The Eagles had to rely several times on 3-point jumpers to get points on the board.

Gilpin actually put on quite a rally to dominate the fourth quarter 24-18. Will Lorenz — who scored what had to be a record 29 points during the game — and Alex Wilhelm each put up 3-pointers to catch the Eagles up to within 8 points, and Boulter narrowed the gap to 57-50 with just over a minute of play remaining.

The entire Eagles team can be proud of their effort during the Lyons game and throughout the season.

As they finished out the regular season, Gilpin Lady Eagles triumphed over Nederland 33-12 on February 15. (Varsity boys did not play that evening.)

Gilpin girls lost their away playoff game 48-21 against Dawson School of Lafayette on February 20 and finished the season with three wins. Dawson went on to win the girls’ District 7 championship on February 23 in their game against Heritage, coming in 34-30. Highland captured third place and Dayspring fourth; their game finished at 51-24.

END_OF_DOCUMENT_TOKEN_TO_BE_REPLACED

Where the dead get to tell their story By Jaclyn Schrock On Saturday, August 21, the Gilpin Historical Society held their annual Cemetery Crawl. Tickets allowed the shuttle of hundreds of guests from the Teller House parking lot to the Cemetery. Depending on v... END_OF_DOCUMENT_TOKEN_TO_BE_REPLACED