Eagles’ boys both fly and fall on the court 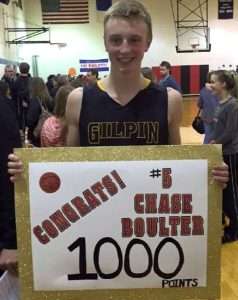 It was a week of mixed emotions for the Gilpin men’s basketball team. A terrible first quarter made the difference as the Eagles fell 71-57 to league rival Shining Mountain, but a sensational first half resulted in a sparkling 68-34 win over Belleview and restored the Eagles’ confidence. Gilpin now stands at 3-1 in 5280 League play and 8-3 overall.

The Eagles’ full-court defensive press was relentless in the first half, and Belleview never had a chance, even on its own court. At half time, Gilpin led 38-12, and the Eagles widened the gap to 56-22 at the end of the third period. At this point Coach Paul Hanson emptied his bench and allowed all of the boys in uniform to play. Belleview won the final quarter 12-6. Gilpin had 15 steals in the game and caused 25 turnovers by the Bulldogs.

Chase Boulter, seeking the 1,000th point of his career, got it early in the game and led Gilpin scorers with 18 points. He now has 1,011 points in his career. Matt Immordino was second in scoring with 11, but eight other players contributed points in Gilpin’s best scoring output of the season. Even so, the Eagles did not hit a single 3-point basket in the game.

On a less happy note, the Eagles ran into a buzz saw in Shining Mountain’s Lions. The speedy Lions used their power passing and accurate long-distance shooting to overwhelm Gilpin 21-8 in the first quarter. The Eagles began to adjust in the second quarter, but Shining Mountain still extended its lead to 36-20. Gilpin then gained control over the momentum and actually brought the distance to 43-37 in the third period, but the game then reverted to first half form. Despite a valiant effort and winning the second half 37-35, the Eagles still fell short at the end. The Eagles had trouble stopping the Lions’ Grey Hill, who used his larger weight and position to muscle 24 points to tie for the game’s scoring lead with Chase Boulter. Jonathan Ramsey aggressively wove his way through the Lions’ defense and tallied 12 for the Eagles, and Matt Immordino reliably canned 11.

Shining Mountain disposed of both of its closest competitors, Gilpin and Rocky Mountain Lutheran, in one week and now shares the league lead with Community Christian, its only unbeaten opponent left. The Lions have five, three-point shooters, and this, combined with their speed, make them very difficult to control. Gilpin’s second half showed that the Eagles can play with them, so should the teams meet in the league tournament, a much different outcome can be expected.

If the weather permits, Gilpin will embark on three road games in three days this coming week. The Eagles will meet league opponent Cornerstone Christian on Tuesday, make up a postponed non-league game with Denver Academy on Wednesday, and meet Longmont Christian on Thursday. The Longmont Christian game will feature the two leading scorers in Class 1-A this year. The Warriors feature 6’9″ Antun Maricevic, the “Croation Sensation,” who leads all scorers with a 35+ points per game average, and the Eagles counter with Chase Boulter who is averaging 25+ points per game. A roaring, high-scoring battle should ensue.

END_OF_DOCUMENT_TOKEN_TO_BE_REPLACED

Benefitting the county, schools, and much more By Don Ireland   This year marks the 30th anniversary of casinos opening in the former little mining towns of Black Hawk, Central City and Cripple Creek, Colorado. In those early years, smoking was allowed inside ... END_OF_DOCUMENT_TOKEN_TO_BE_REPLACED

Where the dead get to tell their story By Jaclyn Schrock On Saturday, August 21, the Gilpin Historical Society held their annual Cemetery Crawl. Tickets allowed the shuttle of hundreds of guests from the Teller House parking lot to the Cemetery. Depending on v... END_OF_DOCUMENT_TOKEN_TO_BE_REPLACED