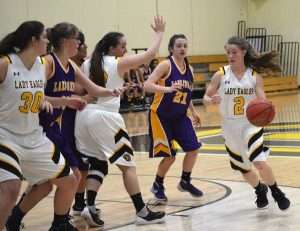 The season resumes after winter break when Gilpin teams meet Longmont Christian away on January 5.

The boys’ hard-fought matchup brought a nail-biting climax to the afternoon’s games, when the Gilpin Eagles grabbed a tight win in overtime. The smell of success was sweet for the Eagles, who lost to Lake County 40-36 last season. The victory is the first win this season for Gilpin, whose record is now 1-4. LC has yet to win a game in six tries.

Although LC put up the first points, the first quarter belonged to Gilpin, 11-6. The Panthers battled back in the second quarter, shooting 17 points to Gilpin’s 11; that brought the score to 23-22 Panthers.

After the halftime break, Gilpin’s #33 Chris Burtschi slammed in a quick 2-pointer, but things began to look a little doubtful for Gilpin, as LC gradually gained a 7-point lead. Instead of slacking, the Eagles picked up the pace with a couple 2-point field goals by #11 Alex Wilhelm and #25 Tanner Davis. Gilpin’s #20 Will Lorenz tied it up with a 3-pointer and brought the tally to 35-35 going into the fourth quarter.

Lorenz drove in another 3-point basket early in the fourth period, and it was the Panthers’ turn to scramble. Three free throws by LC players tied it up at 38-38. From there on, it was a battle to the buzzer. With less than a minute remaining, Lorenz sank a 2-pointer, which was matched by LC, and regular play ended at 47-47.

A four-minute overtime period was added to the clock. Gilpin showed its mettle with several steals, besting the Panthers 9-5 in the period. Final score: 56-52 Eagles.

“I am really proud of the effort, concentration, and teamwork that our student-athletes demonstrated,” Head Coach Paul Hanson noted. “They battled the whole game and found a way to win. They also showed grit, resiliency, and poise when they needed it down the stretch. They are a great group, and I expect them to continue to improve throughout the season.”

Lady Eagles All the Way

Gilpin girls overcame the Panthers, coming in with a 40-16 victory. The Lady Eagles and the Panthers both have overall records of 3-2.

Head Coach Jeff Schuessler commented, “It was great to go 2-0 this week (the girls also beat Rocky Mountain Lutheran on December 14). Between final exams and all the illness going around, we were limited in our preparation. Some kids really toughed it out. I was pleased with our defensive effort. For the second consecutive game, we were able to frustrate our opponent and take them out of their offense scheme.”

“Probably the most impressive game came from Aspen Nadeau,” Schuessler said. “The senior guard set the tone for the contest with her hustle and leadership. She made several plays that shaped the outcome. Overall, going into the break with a 3-2 record, we feel pretty good about things. We have received important contributions from players up and down the whole roster. Our plan is to really focus on our shooting percentage in the second half of the season and continue to mix up our looks defensively to see if we can’t generate more easy looks at the basket.”

Schuessler also gave kudos to the boys’ team. “Their overtime win was impressive. They have been dealing with the same difficult week that the girls have, and they showed a lot of grit in that game. They persevered through it and made some big plays on both ends of the floor.”

The Eagles visited Rocky Mountain Lutheran of Denver on December 14 in non-conference matches. The varsity girls won 32-21, and the boys suffered a 59-41 loss.

Craig Ball, Gilpin’s head football coach, reported that three of his players made the list of the 2017 All-State football teams. Seniors Austin Boulter, Manny Gomez, and Jack Ball were named to the prestigious 8-man roster. The list is presented by the Colorado High School Activities Association (CHSAANow.com), ColoradoPreps.com, and MaxPreps.com.

“They have really grown since their freshman years. It’s been a long time since a Gilpin football player has made this team,” Coach Ball advised.

The teams were created following nominations from leagues and a vote of head coaches across the state. Players were placed onto the first-team, second-team and honorable mention based on the number of votes they received. The players are selected solely from the results of the coaches’ vote.

END_OF_DOCUMENT_TOKEN_TO_BE_REPLACED

Benefitting the county, schools, and much more By Don Ireland   This year marks the 30th anniversary of casinos opening in the former little mining towns of Black Hawk, Central City and Cripple Creek, Colorado. In those early years, smoking was allowed inside ... END_OF_DOCUMENT_TOKEN_TO_BE_REPLACED