Eagles baseball team finishes with a third place in league 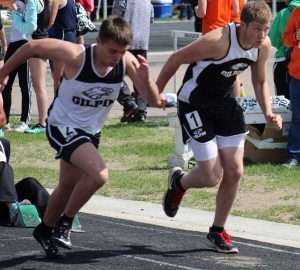 Track at 1A Invitational yields personal bests for all team members

The Gilpin County High School Eagles varsity baseball team competed with the Community Christian Crusaders of Northglenn (CC) in double headers on Tuesday, May 3. The Eagles lost the first match 4-0, but won resoundingly 16-6 in the second game, finishing with a 7-6 record, including 2-0 at home and 3-6 away. The big win against the Crusaders wasn’t quite enough to give the Eagles a berth at the playoffs, however.

Pitching coach Kirk Johnson stated, “Sorry to report that today’s league results put us in third place in the 5280 league, eliminating us from the district playoffs this Friday. We, Rocky Mountain Lutheran, and Cornerstone Christian Academy all ended with a 5-3 record, having split double headers with each other.”

Gilpin’s victory in the second game with CC was a home conference match-up. Gilpin exploded with 4 runs in the first inning, ahead of CC with 2. The second inning went scoreless for both clubs. In the third inning, the tables were turned, the Crusaders running 4 in while Gilpin just got 2, and the score was tied 6-6. From then on, it was the Eagles all the way, as the boys ran in 3 in the fourth inning, 6 in the fifth, and 1 more in the sixth inning.

Jon Lovett led Gilpin with 3 runs, while teammates Bjorn Tomlinson, Chase Boulter, Sam Snyder, and Braedyn Perez came in with 2 each. Following with 1 run apiece were Chad Holmes, Brekken Billman, Cooper Lindberg, Will Lorenz, and Nick Peterson. Lovett, Snyder, and Boulter were the hitters for Gilpin. Lindberg had 2 RBI’s, with Perez, Snyder, W. Lorenz, and Eryk Lorenz coming in with 1 each. Eagles’ batters had 15 walks.

Gilpin had only 6 strikeouts to the Crusaders’ 10.

The Eagles were hot for stolen bases, Lovett leading the squad with 6. Tomlinson and Snyder snatched 4 each.

Head Coach Tony Lorenz congratulated Jonny Lovett as Player of the Game. “Nice game at the plate and on the field, Jonny.”

Eryk Lorenz was selected as Player of the Game for a strong pitching performance in the first battle against CC.

Gilpin County High School’s track team participated in the 1A Invitational non-conference meet in Limon on Saturday, May 7. Forty-one of the sixty-one 1A track teams attended the meet. Both the Gilpin boys’ and girls’ teams put in a good showing; the boys placed 22nd, and the girls placed 26th.

“As we come to these last meets of the season, all of the hard work that the kids have put in during practice is starting to pay off,” said Head Coach Craig Ball.

The last meet of the season is in Kremmling on Thursday, May 12.

END_OF_DOCUMENT_TOKEN_TO_BE_REPLACED

Where the dead get to tell their story By Jaclyn Schrock On Saturday, August 21, the Gilpin Historical Society held their annual Cemetery Crawl. Tickets allowed the shuttle of hundreds of guests from the Teller House parking lot to the Cemetery. Depending on v... END_OF_DOCUMENT_TOKEN_TO_BE_REPLACED