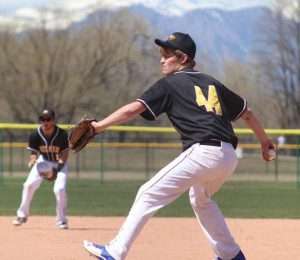 Three wins, one loss in two sets of double headers

Gilpin High School’s baseball team had a busy week last week, with double headers against the Denver Jewish Day Tigers (DJD) on Wednesday, April 6, and against the Cornerstone Christian Academy Bulldogs (CCA) on Saturday, April 9. All games were away league games, and give the Eagles a 4-2 record.

The Eagles won the first of the two games against host DJD on April 6 by an 11-7 margin. The first inning was close, with Gilpin scoring 3 runs and DJD 2. DJD was scoreless in the second inning, while the Eagles scored 2 more runs, but the tables were turned in the third inning, DJD tying the score at 5-5 with 3 more runs. The Tigers then went on to put two more runs on the board to gain a 7-5 lead.

Gilpin decided it was time to battle back, scoring another run in the fifth. Their fans were gratified as the squad crossed home plate 5 times in the seventh inning. DJD was unable to score again, so that left the score 11-7 Gilpin. Gilpin had 20 hits to DJD’s 11.

Player of the Game was Braedyn Perez, who hit 4 for 5 with 2 doubles and a triple, had 2 RBI’s and 2 stolen bases.

There were many other good moments in the game. Eryk Lorenz had 4 hits. Chase Boulter got 2 runs batted in and 2 doubles. Will Lorenz and Bjorn Tomlinson each had 2 stolen bases; the team’s total was 11. The Eagles achieved 21 put-outs, 9 by catcher Tomlinson.

Pitchers were Chase Boulter, who pitched 5 innings, and W. Lorenz, with 2 innings.

Jon Lovett was the Player of Game this time, with 2 singles, 2 runs scored, and 2 runs batted in.

The Eagles visited Cornerstone Christian Academy on April 9 in double header action, losing the first game 21-9. The teams were pretty even for the first two innings, ending the second inning 9-8 CCA. Gilpin fared poorly in the third inning, remaining scoreless while the Bulldogs crossed home plate 9 times. The Eagles made another effort in the fourth inning with 1 run, but that was all she wrote as CCA scored 3 more runs to finish 21-9.

W. Lorenz was Gilpin’s Player of the Game, pitching 3 innings with 3 strikeouts and hitting 2 singles, with 2 RBI’s.

Runs were scored by E. Lorenz and Lovett (2 each), and by Billman, Perez, Snyder, W. Lorenz, and Tomlinson (1 each). Perez and Lorenz had 2 RBI’s each, with Billman, Snyder, Boulter, Peterson, and Lovett each hitting 1. E. Lorenz and Perez both had doubles.

CCA fans were pleased with 3 doubles, 2 triples, and 2 home runs.

The Eagles snatched 5 stolen bases. Both teams had 18 putouts.

Gilpin made a comeback in the second show to overcome CCA 7-2. At first, things looked doubtful, with 4 scoreless innings for the Eagles and with the Bulldogs scoring their only 2 runs. It was a tie ball game after the fifth inning, as Gilpin finally scored 2 runs. The Eagles came alive during an extra eighth inning to score 5 runs and win 7-2. Gilpin walloped 8 hits to CCA’s 10.

Chase Boulter was named Player of the Game on this one; he pitched 7 innings and gave up only 2 runs, with 11 strikeouts. He also had 3 RBI’s.

Gilpin players scoring runs were E. Lorenz with 2 and Billman, Perez, W. Lorenz, Boulter, and Lovett with 1 each.

W. Lorenz and Tomlinson each nabbed a double.

The team garnered a total of 22 put-outs, 11 by Tomlinson.

END_OF_DOCUMENT_TOKEN_TO_BE_REPLACED

Benefitting the county, schools, and much more By Don Ireland   This year marks the 30th anniversary of casinos opening in the former little mining towns of Black Hawk, Central City and Cripple Creek, Colorado. In those early years, smoking was allowed inside ... END_OF_DOCUMENT_TOKEN_TO_BE_REPLACED