Eagles’ baseball and track teams wrap up the 2019 season 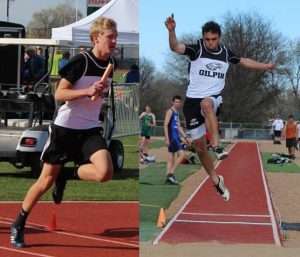 Stephen King to represent Gilpin at the state track meet

Track and field athletes from Gilpin High School did well at the Holy Family Last Chance non-conference meet at Broomfield on Saturday, May 11, scoring 17.5 points. The boys placed 12th and the girls 18th out of 22 teams. Nederland and Clear Creek were other mountain area teams competing. Holy Family placed first for both boys and girls.

“Great meet on Saturday!” exclaimed Head Coach Craig Ball. “This was our first meet at Holy Family. The weather was perfect for our last meet of the season. We had nine personal records – the girls’ 4×100 relay team broke the 25-year-old school record held by Underwood, Gain, Mornis and Tilley in 1994. The new record time of 57.44 was set by freshmen Madison Altman and Callie Ralstin and sophomores Olivia Ball and Jasmine Crook Arends.”

Sophomore Stephen King lowered two of his current four school records. His new record times are 11.70 in the 100-meter dash and 42.93 in the 300-meter hurdles. King placed 2nd in the 300-meter hurdles at the Holy Family meet and will run for Gilpin in that event at the 2019 CHSAA Class 2A State Championships on May 16-18 at Jeffco Stadium in Lakewood. The preliminary race is on Friday morning, May 17; if King runs one of the fastest nine times, he will compete in the finals on Saturday afternoon, May 18.

“Stephen is the first Gilpin kid to qualify in the 300-meter hurdles in our school’s history,” Ball stated.

He referred to Gilpin’s new track as being instrumental in the team’s improvement. “It’s our first year practicing with the new track, and we had five new school records for the boys and three for the girls.”

Sophomore Nolan Lindberg, who flew to a 13th place in the triple jump, set a new school record in that event and broke Anthony Cole’s 2006 jump by nearly 3 feet. Lindberg’s new record jump was 35’2.00”.

Junior Nicole Adams also distinguished the team by leaping 4’4.00” to earn 11th place in the high jump, and Madison Altman also made the top 20 in the shot put with a distance over 26 feet.

Here are the complete results for Gilpin at the Holy Family meet.

Gilpin High School varsity baseball athletes lost their playoff semi-final game 6-2 on May 10 to the Dawson School Mustangs of Lafayette. The Eagles finished their season 3-9 in overall wins-losses and 2-7 in conference play. The game was part of the 2019 CHSAA District/Regional Baseball Tournaments for Class 2A District 7. Dawson went on to play Highland for the championship title, winning 11-1.

Gilpin and Dawson held each other scoreless in the first inning. Dawson scored 1 run in the second inning and another in the third. The fourth inning also went without runs for either team. Gilpin got a break in the fifth inning with 2 runs by seniors Blaizun Diamond and Cooper Lindberg, but the Mustangs responded with 4 runs to finish the game.

Gilpin sophomore Nolan Lindberg knocked out 1 hit for the Eagles. In fielding, sophomore Blake Boulter got 12 putouts. Senior Will Lorenz pitched for Gilpin.

END_OF_DOCUMENT_TOKEN_TO_BE_REPLACED

Benefitting the county, schools, and much more By Don Ireland   This year marks the 30th anniversary of casinos opening in the former little mining towns of Black Hawk, Central City and Cripple Creek, Colorado. In those early years, smoking was allowed inside ... END_OF_DOCUMENT_TOKEN_TO_BE_REPLACED