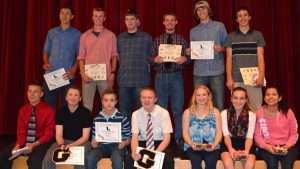 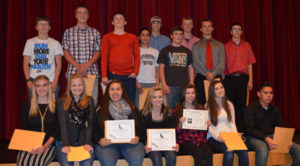 Gilpin County High School held its spring athletic awards ceremony on Tuesday, May 17. Athletes, coaches, and parents celebrated the second year of baseball and track programs for the Eagles. The busy folks of the Gilpin Booster Club provided the banquet that preceded the awards.

Schuessler presented awards to three athletes who had made a four-year commitment to their sport: seniors Chase Boulter, Jon Lovett, and Bjorn Tomlinson.

Awards for Academic All-State First Team in track to went to Jada Gohdes and Chase Boulter.

Nick Peterson, Sam Snyder, Eryk Lorenz, Jonny Lovett, and Chase Boulter were honored for making 5280 Academic All-League First Team in baseball and also Academic All-State First Team. Schuessler reminded the audience that this was the final year for Gilpin to be part of the 5280 League; next year, the school will move to the higher 2A Mile High League classification.

Schuessler advised that the Colorado High School Activities Association keeps track of the grade point averages of the athletes. The average GPA in the state for athletes is 3.06. This is lower for kids who don’t participate in various activities.

“Our kids do everything,” said Schuessler, like three sports, Student Council, and many other pursuits. Highlighting the difference, Schuessler reported that the cumulative GPA for the girls’ track team was 3.36, and for the boys’ track team it was also 3.36. For baseball, the Academic All-State team members had a cumulative GPA of 3.59.

Schuessler introduced Megan Finnesy, race director of the Dirty 30 trail run held annually at Golden Gate Canyon State Park. Eagles’ athletes and many parents participate as volunteer helpers during the race, which has raised thousands for the Gilpin athletics departments. This year’s race, the eighth annual, will be held on Saturday, June 4.

Finnesy related, “Since we have been working with you, the popularity of the event has grown. We couldn’t have made it what it is today without you.”

She explained that the Dirty 30 is one of the toughest and largest attended 50K trail races in the country and has achieved national recognition. $31,500 has been donated to beneficiaries in the event’s history, Finnesy said.

A new award this year is the Sisu, a Finnish word describing the qualities of bravery, resilience, and perseverance. It will be given to Dirty 30’ers who take on and finish the race as their first ultra trail running race.

This year, Finnesy also started an Ambassador program, where new runners are teamed with those who have raced it before. Her goal is to have a 100 percent finish rate of the Sisu’s, and she informed the Gilpin students, “Your job is to encourage them at the aid stations and make sure they are doing what they should. Talk them through it if they want to quit.”

She reported that there are 500 racers this year, down from 600 last year. The race is under a special watch with the Park Service. “They thought last year’s race was too congested. With fewer racers, though, it will be harder to make as much money for the school, so I want it all to run smoothly. If it does, the Park will consider having more racers again next year.”

“Jim is our number one fan,” Lorenz said. “He hasn’t missed a game in years, even though he has no kids on the team now. And Kim came to all the games, brought coolers with food and drink, and took thousands of amazing photos!” The coaches gave gifts from the team to both supporters.

Lorenz continued, “We had a great season. We were in first place in a three-way tie. Only two teams went to the playoffs, and we lost our tie-breaker. We were ninth in the state for RBI’s and finished higher than some teams that made the playoffs. I’m very proud of this team. Every day, we were in the gym, but the guys didn’t complain. We raised our batting average, and when on the field, did well. We were blessed to have Kirk Johnson – he contributed a lot of knowledge, fire, and fun. He’ll be back next year!”

Team members voted for several special awards. The Golden Arm Award (best pitcher) went to Chase Boulter; the Golden Glove Award was earned by Bjorn Tomlinson and Eryk Lorenz; and the Silver Slugger Award was given to Eryk Lorenz. The War Eagle Award, which exemplifies what it means to be a Gilpin Eagle, went to Will Lorenz and Jon Lovett.

Graduating seniors Chase Boulter, Bjorn Tomlinson, Jon Lovett, and Jon Gonzales received keepsake photo collages made by the parents, and Lovett and Boulter returned thanks to the coaches, along with gifts.

Coaches Craig Ball and Kellie Bayne presented the awards to the track team.

“We had a great season,” Ball reported. “We did six of seven meets, missing the first due to snow. We had great relay results. The team set school records and had great individual performances.”

Including records kept from several years back, when Gilpin ran with the Clear Creek team, Ball said, “The girls set new records in the 4×200, shot put, discuss, and several other events. The boys set 12 school records and did it without a track to practice on. I wonder how good they’d be if they had a track?” he joked.

The team expressed thanks with gifts to the coaches.

END_OF_DOCUMENT_TOKEN_TO_BE_REPLACED

Benefitting the county, schools, and much more By Don Ireland   This year marks the 30th anniversary of casinos opening in the former little mining towns of Black Hawk, Central City and Cripple Creek, Colorado. In those early years, smoking was allowed inside ... END_OF_DOCUMENT_TOKEN_TO_BE_REPLACED