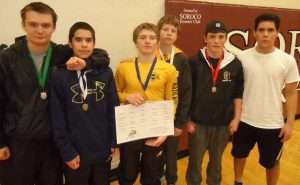 Gilpin High School wrestlers had a good tournament at Sheridan on December 19, although none of the boys won a place on the podium. There were 23 teams at the tourney and only three mats, reported Head Coach Craig Ball, so it made for a long day, and the tournament was cut short due to time. Gilpin wrestlers were not able to finish some of the brackets that they were in.

“All the boys did well,” Coach Ball said. “We mostly competed with 3A schools. Gilpin wrestlers Josh Trujillo and Dante Nadeau had winning records for the tournament, and the rest all got wins.”

Gilpin’s Lady Eagles high school varsity basketball team struggled once again, losing 25-76 to the North Park Wildcats in an away non-conference game on December 17. The Lady Eagles hold a 2-4 record so far this season, 0-2 away.

The young team was hampered by an unfortunate 29 percent field goal record and multiple turnovers. Gilpin was also crippled by two of their strongest players being out with injury: senior Khristine Barr and junior Jada Gohdes. The other players worked hard and even came out on top at the end of the first quarter 11-10. But the Wildcats clawed their way past the Eagles during the second quarter, scoring 20 points as Gilpin only managed one point. The third and fourth periods were a little better, Gilpin scoring 8 and 5 points, respectively, to North Park’s 18 and 27.

The top scorer for Gilpin was Cicely Lepro with 9 points. Teammates Berkley Davis and Carly Johnson followed with 5 and 4. Annabel Diekman dunked 3 points, and Keely Schmidt and Shania Gonzales each made 2 points. The team had 10 field goals total, including one three-point field goal by Diekman. Schmidt scored 2 points on free throws, while Davis and Lepro scored one point apiece on FT’s.

Diekman and Aspen Nadeau each contributed 2 assists, with Davis and Armstrong pitching in with one each.

The Eagles did a respectable job on steals, Armstrong and Schmidt getting 2 apiece and Davis, Johnson, Diekman, and Gonzales each helping with one. Lepro was able to make one block.

The Lady Eagles meet University’s team away on Tuesday, January 5 and South Park away on Saturday, January 9.

END_OF_DOCUMENT_TOKEN_TO_BE_REPLACED

Where the dead get to tell their story By Jaclyn Schrock On Saturday, August 21, the Gilpin Historical Society held their annual Cemetery Crawl. Tickets allowed the shuttle of hundreds of guests from the Teller House parking lot to the Cemetery. Depending on v... END_OF_DOCUMENT_TOKEN_TO_BE_REPLACED

Benefitting the county, schools, and much more By Don Ireland   This year marks the 30th anniversary of casinos opening in the former little mining towns of Black Hawk, Central City and Cripple Creek, Colorado. In those early years, smoking was allowed inside ... END_OF_DOCUMENT_TOKEN_TO_BE_REPLACED