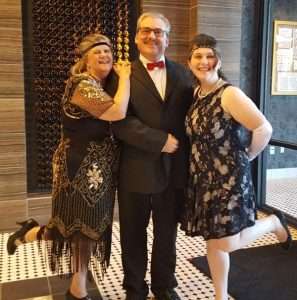 Fans of BBC’s historical drama about the lives of the aristocratic Crawley family and their staff, “Downton Abby,” have cause to rejoice as the much regaled television show comes to the big screen for a final(?) goodbye. Writer Julian Fellowes has set this up to tie neat little bows on many of the story lines so that if there are no more movies, it will be okay. But is the movie okay? I am a big fan of the television show, so I have a bias, but I will try to keep my bias in check.

The Crawley family and their staff are excited and anxious to learn that King George V, played by Simon Jones (“Hitchhiker’s Guide to the Galaxy,” “Monty Python Live”), will be visiting Downton Abbey on his way to another event; and as part of his entourage, the King is bringing his own staff to wait on him during their stay resulting in tension and passive aggressive actions with the Downton Staff. Upstairs, Violet, played by Maggie Smith (“Harry Potter and the Order of the Phoenix,” “The Lady in the Van”), is surprised by the arrival of her cousin Maud, played by Imelda Staunton (“Harry Potter and the Order of the Phoenix,” “Finding Your Feet”), who has claim to the Downton estate which she shockingly wants to endow to her chamber maid. With the Crawley’s future at Downton in question, they must push aside their anxiety to focus on a successful visit of the royal family; rainstorms notwithstanding.

History. This film is a glorious look on the aristocracy of the late 20s in England; taking into account the relationships between servants and the served, and the challenges of gender, social standing, class, and sexual identity.

Plot. Although the plot is rather thin, it provides an example of great story-telling without the use of violence, shock, or language to entertain.

Music. John Lunn’s familiar sweeping score from the television series is back in full force and somehow more poignant with the surround sound system in the theater. The theme is the perfect feel to accompany the decency and challenges of being a Crawley.

Restraint. Considering the prior connections of some of the actors, writer Julian Fellows avoids the temptation to write lines referring to other works which would be out of place and shows incredible restraint in never allowing spouses Staunton and Carter in the same scene. Since their characters would never interact in that time period, it was a good choice, albeit disappointing for those watching who know the connection. The story is better for it.

Cheese. The stories of the individual characters wrapped up very nicely in a tidy, Disney-like bow. A grim future could not keep these characters from ending with a smile. Not only is this unrealistic, but it is inconsistent with the television series.

As a fan of the Downton Abbey show, this film was a gift that allowed me to revisit beloved characters and see what they are up to. It was absolutely enjoyable and entertaining. If this is your first exposure to the Crawley family, then you will never quite understand the social mores of the time period. Many of these characters have had years to get comfortable around each other in another class system and so behave very differently in this movie than when the show first aired. The respect of each other has built up from previous trials and tribulations. The movie is rated PG for thematic elements, some suggestive material, and language (the word “bloody” is tossed around a few times – Americans are indifferent; English are shocked). Its one flaw is the sappy ending and for those who have seen the film, I offer an alternative ending after the rating. Out of five, my fabulous friend Karen rates the film five butler bells; my beautiful wife rates it four budding romances; my lovely daughter rates it four wet chairs; and the ending brings me down to a rating of three and a half cloyingly sweet treats.

The conversation between Violet and Mary is never heard, instead we hear Violet’s voice-over interspersed with shots of her making her way up the stairs, to her bed chamber, and lying down to take her final breath knowing the Crawley’s and Downton Abbey have been left in good hands. The End.

END_OF_DOCUMENT_TOKEN_TO_BE_REPLACED

Benefitting the county, schools, and much more By Don Ireland   This year marks the 30th anniversary of casinos opening in the former little mining towns of Black Hawk, Central City and Cripple Creek, Colorado. In those early years, smoking was allowed inside ... END_OF_DOCUMENT_TOKEN_TO_BE_REPLACED