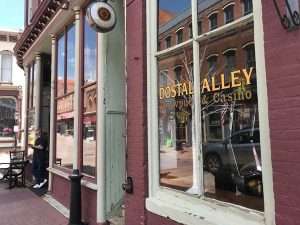 After a frantic week of changes and remodeling, Central City’s Dostal Alley is open again for business. The regular patrons of the casino, brewpub and restaurant were literally knocking at the doors, asking how soon they could get in. When the doors opened again for business last week after being closed for nearly a week, the customers were smiling.

Dostal Alley, owned and operated by the Schmalz family, has been a cornerstone for Central City. The remodeling changes have been a labor of love – and some typical, chaotic day-by-day adventures for everyone at the business at the 116 Main Street, at the intersection of Gregory Street and adjoining the back alley that is the namesake for the establishment. “It’s been a lot of preplanning, then adjusting as we installed the changes,” said Buddy Schmalz, brew master.

His sister, CinDee Schmalz Spellman, agreed. “It’s been exciting but a lot of hard work.”

Although the exterior of the business hasn’t changed, the inside was modified – at least, slightly.

Gone are some of the old gaming machines, some of which were considered “a second home” by patrons. Some of the old machines are still there, retrofitted with new screens and internal computers, bringing them into the 21st century.

Another huge change: the dollar-coin sized metal tokens are gone. Dostal Alley has converted all of its gaming devices to paper tickets, called TITO (Ticket In, Ticket Out). Just for memory’s sake, a few machines actually generate the sound of coins dropping into a hopper when a paper payout ticket is printed.

Dostal Alley also is offering player’s club cards to patrons, who will accumulate points. Player’s club cards have been part of Colorado casino towns for decades, serving as a rewards system to regulars. Details on the rewards program are not yet complete.

There’s still another new offering planned for later this year: Dostal Alley will venture into sports-betting via an online app, similar to apps offered by other casinos in Black Hawk, Central City, and Cripple Creek.

The long wooden bar at the establishment has barely changed. It looks the same but the old video poker terminals built within it are among the computer upgrades, resulting in a brand-new look. The “buy a friend a drink” chalkboard also remains for those who want to do so.

Unchanged is Dostal Alley’s regular assortment of award-winning craft beers, make on the premises. In addition to cold glasses of draft beer available at the bar, the brewpub sells its offerings in cans, bottles, and growlers. Also unchanged is the downstairs kitchen, which whips up pizza, sandwiches, and snacks. Due to the Covid-19 pandemic, restaurant seating inside remains unavailable. However, there are tables outside to accommodate diners and take-out orders are still available.

Photo: Gaming tokens have been retired at Dostal Alley.

END_OF_DOCUMENT_TOKEN_TO_BE_REPLACED

Benefitting the county, schools, and much more By Don Ireland   This year marks the 30th anniversary of casinos opening in the former little mining towns of Black Hawk, Central City and Cripple Creek, Colorado. In those early years, smoking was allowed inside ... END_OF_DOCUMENT_TOKEN_TO_BE_REPLACED