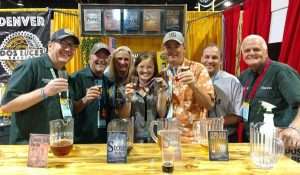 When the Great British Beer Festival (GBBF) was only four years old in 1981, a quiet, unassuming nuclear engineer and homebrewer named Charlie Papazian visited his first GBBF in London. After he returned to Colorado from that eye-opening experience he thought, “That was a cool thing, maybe we could do something like that here.”He discussed the possibilities with legendary UK beer writer Michael Jackson who replied “That’s a great idea Charlie, but where will you get the beer?” ─ and the rest, as they say, is history. The 38th Annual Great American Beer Festival (GABF) was held at the Colorado Convention Center October 3-5, 2019.

The first Great American Beer Festival (GABF) took place in Boulder, Colorado on June 4, 1982 during the 4th annual American Homebrewers Association (AHA, also founded by Charlie), with only 24 breweries, 47 beers and 800 attendees. Compare those numbers to the 38th GABF which hosted a whopping 2,295 breweries competing for 321 medals, more than 800 breweries pouring 4,000+ beers on the convention floor, and 60,000 attendees over three days of 1-ounce beer tasting sessions.

With only a 3% chance of success, the odds of winning a GABF medal are extremely low, and universally dreamt about by all participating brewers. “If you don’t have butterflies in your stomach, you don’t have a beer entered in the competition,” GABF Competition Director Chris Swersey said in opening the annual award ceremony in the Colorado Convention Center’s Bellco Theatre on Saturday, October 5, 2019.

In addition to 9,497 commercial beer entries in 107 beer style categories, there were 113 Pro-Am and 70 brewery collaboration entries that were tasted and compared by 322 judges from 18 countries (all GABF records). The average number of beers entered per category was 88, with Juicy or Hazy India Pale Ale the most popular category for the second year running, with 348 entries down to 29 entries in the Other Strong Beer category.

Among the 2,295 breweries competing for medals from all 50 states, Washington, D.C., Puerto Rico, and the Virgin Islands were 401 first-time GABF entrants and 37 first-time GABF winners. Gilpin County’s own brewery, Dostal Alley Brewpub & Casino in Central City, is no stranger to GABF medals. After only three years of brewing, Brewmaster Buddy Schmalz won his first Silver medal for Pub Ale in the Ordinary or Best Bitter category in 2001. Since then, he and Brewer Emeritus Dave Thomas have won three GABF medals for Shafthouse Stout in the Classic Dry Irish Stout category in 2010, 2012 & 2014.

“We thought we were on a roll, winning every even-numbered year” Schmalz said, “then the competition got tougher and we batted 0 in 2015-2018.” This year however, Dostal Alley again won Silver with Cousin Jack Pub Ale, the same beer with an updated mining-related name that won GABF Silver 18 years earlier. “Cousin Jack” is the colloquial name given to hardrock miners from Cornwall, UK in the late 1800s.

“Cousin Jack Pub Ale is brewed with heritage variety Maris Otter malt imported from Crisp Malting Company in the UK,” said brewer Thomas. “We use only British aroma hops in this traditional beer style. Even though Cousin Jack is considered an English style Best Bitter, don’t be fooled by the style names. English Bitters have far less hop bitter flavor than typical IPAs (India Pale Ales) in the US today.”

END_OF_DOCUMENT_TOKEN_TO_BE_REPLACED

Where the dead get to tell their story By Jaclyn Schrock On Saturday, August 21, the Gilpin Historical Society held their annual Cemetery Crawl. Tickets allowed the shuttle of hundreds of guests from the Teller House parking lot to the Cemetery. Depending on v... END_OF_DOCUMENT_TOKEN_TO_BE_REPLACED