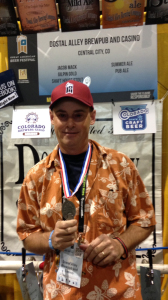 By Dave Thomas and Buddy Schmalz

The 28th annual Great American Beer Festival (GABF) was held at the Colorado Convention Center October 2-4, 2014. The world’s largest commercial beer competition ever held had 222 beer judges from 10 countries evaluating 5,596 total US-brewed beers. Award-winning brewers received prestigious gold, silver, and bronze medals in 90 beer categories covering 145 different beer styles. Winning a GABF medal means that a beer is “among the best examples of each style in the U.S” according to the Brewers Association (Boulder, Colorado) that hosts the festival. This year, individual breweries (large, regional, micro, nano, and brewpub) were allowed to enter a maximum of five beers for judging.

This year a total of 5,507 beers were entered from 1,309 breweries, making the overall odds of winning one of three medals per category a mere 0.27%. For the fourth time in thirteen years, Central City’s own Dostal Alley Brewpub & Casino (the only brewery in a Colorado casino) beat the odds! Brewers Buddy Schmalz and Dave Thomas won another silver medal in the Classic Dry Irish Stout category for Shafthouse Stout.

END_OF_DOCUMENT_TOKEN_TO_BE_REPLACED

Benefitting the county, schools, and much more By Don Ireland   This year marks the 30th anniversary of casinos opening in the former little mining towns of Black Hawk, Central City and Cripple Creek, Colorado. In those early years, smoking was allowed inside ... END_OF_DOCUMENT_TOKEN_TO_BE_REPLACED