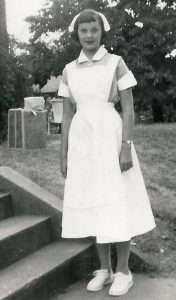 With great sadness, the McBride and Hileman families announce the passing of Donna Irene Allen McBride on May 2, 2020 at River Oaks Retirement Manor in Lafayette, CO. Donna was born on July 10, 1933 in Idaho Springs, Colorado, and grew up in nearby Central City, Colorado. Donna’s parents were Earl and Elva Allen of Central City.

Mrs. McBride graduated from Northwestern Louisiana University’s nursing program in 1955 as a Registered Nurse. For more than forty years after that, as she moved her family from pillar to post as the wife of a US Army officer, she plied her nursing trade in a dozen different military and civilian hospitals, finally retiring from Nursing in 1999. She worked most of her career in the “Ob-Gyn” field, and would often joke about the doctors who would come into a delivery room when all the work was already done, and take credit for the delivery. By her own calculation, she presided over more than 10,000 births.

While many things brought Donna pleasure and happiness (especially celebrating holidays), three enthusiasms, which she was blessed enough to pursue fully, particularly stand out. She was an avid reader of all manner of literature; she was an avid traveler and tourist of the first order, and she was a very shrewd card and game player. Her children benefited from all of these passions over the course of their growing up. This period included eight years spent in West Germany in the 1960s and 70s, during which Donna dragged her kids into cathedrals and museums from Munich to Moscow. She always knew what we needed – even if we didn’t agree.

Donna McBride leaves behind family and friends who have benefitted from her dry humor, her discipline to do things well, her patience as an Army wife, and her sharp intellect. There will be a celebration of Donna’s life at the home of her grandson Doug Hileman in Baton Rouge when the current health situation abates and allows a proper gathering.

END_OF_DOCUMENT_TOKEN_TO_BE_REPLACED

Benefitting the county, schools, and much more By Don Ireland   This year marks the 30th anniversary of casinos opening in the former little mining towns of Black Hawk, Central City and Cripple Creek, Colorado. In those early years, smoking was allowed inside ... END_OF_DOCUMENT_TOKEN_TO_BE_REPLACED