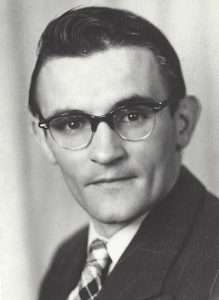 Don Sr. was born in Idaho Springs April 10, 1927 to Mertrand Avery Mattivi and Domonic Paul Mattivi of Central City, Co.  He was raised in the Black Hawk/ Central City area and graduated from the local High School in 1944.

When World War II broke out, he joined the Army even though he was still in High School. After HS graduation, he attended the University of Colorado in Boulder until he turned 18 and was called to active duty.

He serviced in the Army Air Corp from July of 1945 until November of 1946. During this time he met Mary E Rediess and fell in love. They were married in November of 1947.

Upon graduating from the University of Colorado, he accepted a job teaching for Gilpin County High School. He taught physical education and history, and also coached basketball, football and track. Later he became the Principal up until the High School closed in 1966.

He then taught two years at Byers High School, but missed his mountains. He accepted a teaching position at Evergreen High School where he taught from 1968 to 1986. He taught history, building trades, and coached. He was the Cross Country and Track coach and assisted with other sports.

After retiring from teaching, he turned to construction and could be seen regularly in Central City working for Bill Russell, Jr. In addition to teaching and construction, he also loved fishing, gardening, and swing dancing.

His is survived by his children Donald Jr., Michael, Rebecca, and Mark; and grandchildren Adam, Jaxon, Connor, and Andrew; and great granddaughter Ricci.

He was preceded in death by his loving wife Mary, who died in 2006.

A memorial will be held for Donald towards the end of summer, details to be announced later. In lieu of donations, the family asks that donations be made to Denver Jazz Club.

END_OF_DOCUMENT_TOKEN_TO_BE_REPLACED

Where the dead get to tell their story By Jaclyn Schrock On Saturday, August 21, the Gilpin Historical Society held their annual Cemetery Crawl. Tickets allowed the shuttle of hundreds of guests from the Teller House parking lot to the Cemetery. Depending on v... END_OF_DOCUMENT_TOKEN_TO_BE_REPLACED