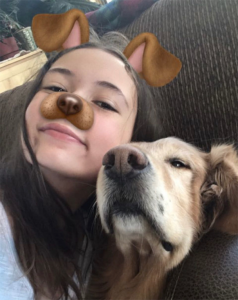 Locals rely on their furry friends to fill social void

During the pandemic, folks have been staying home more than usual. As such, feelings of loneliness have become worse than ever before. Besides family, pets have also helped Gilpin residents remain positive during the pandemic. Archer O’Brien, Cassidy Wood, and Aucklynn Sacco have relied on their dogs for fun times and as a much-needed quarantine buddy.
Cassidy Wood owns an adorable Golden Retriever named Barley. As an old dog, 14 years old, Barley has trouble hearing, and he barks a lot. Cassidy’s mother, Janey, got Barley when Cassidy was five. Barley loves going to the neighborhood reservoir, but he does not enjoy swimming. During quarantine, Barley has kept the entire family entertained with his barks and random noises.
Another shining star, Puck, Aucklynn Sacco’s dog, is a Black German Shepherd. As a five-year-old dog, Puck is rather adventurous and hungry! Aucklynn recalls a story of Puck eating something he should not have. “A couple of years ago, I made a chocolate cake with chocolate frosting for my grandma’s 80th birthday, and I left it out on the counter. When I came back to check on it, the cake was half-eaten. That evening we were singing Happy Birthday, and he jumped up at the cake, wanting more. Though chocolate is not supposed to be good for dogs, he never got sick, and nothing ever happened to him.” During quarantine, Puck has provided a friend for Aucklynn.
A pair of dogs, named Timber and Phineas, are renowned in the O’Brien Household. Owned by Archer O’Brien, both dogs came from the shelter. Phineas moved to Colorado with the family when Archer was in middle school. Years, later the family adopted Timber from Charlie’s Place as his previous owner was in the reserves and was sent off for duty. Phineas is seven or eight years old. He is a Great Pyrenees and Yellow Lab mix. Timber, six or seven, is a Husky and Malamute mix. Much like Puck, Phineas also enjoys the occasional snack. As Archer says, “When Phineas was a puppy, he would steal full sticks of butter off the counter. We lost a lot of butter during those years.”
Archer has relied heavily on her dogs as emotional support during this time. “Sometimes when I would have breakdowns due to schoolwork or lack of human interaction, I’d just go lay with one of my pups for a while and just pet and hug them. They are in fact scientifically proven to be stress relievers. Just petting a dog for 15-30 minutes a day can lower your blood pressure and that has held true in my case.”

END_OF_DOCUMENT_TOKEN_TO_BE_REPLACED

Benefitting the county, schools, and much more By Don Ireland   This year marks the 30th anniversary of casinos opening in the former little mining towns of Black Hawk, Central City and Cripple Creek, Colorado. In those early years, smoking was allowed inside ... END_OF_DOCUMENT_TOKEN_TO_BE_REPLACED