Do you have what it takes to make a difference? 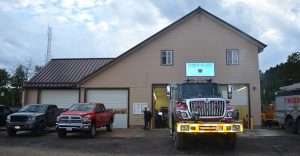 “I have been a responder and have also been helped by responders.” “I am looking for experience that I’ll need as I go for my EMT training.” “I just moved to the mountains and want a chance to give back to the community.”

Those were a few of the reasons given for volunteering as a firefighter, expressed by participants at a recruitment open house given by Timberline Fire Protection District (TFPD) on August 21. The event took place at Station 3, 660 Highway 46.

TFPD is actively searching for people to join the department in providing emergency services to the community, and several people showed up that evening to get an idea of what it’s like to be a TFPD volunteer. They joined department personnel for a barbecue, a couple of informative videos, and a talk from Chief Chris Jennings about the life of a volunteer firefighter. The evening was capped off by opportunities for the attendees to hop into one of the fire trucks and to try their hands at spraying water from a fire hose. Jennings finished by spraying the front of the fire station in a demonstration of the compressed air foam system.

“I firmly believe that volunteers are the backbone of a fire department,” the Chief stated in welcome, “and I’m very excited that you came to explore this opportunity. Our budget would only support paying about 12 firefighters. Volunteers give tremendous value to the organization, and we really need you.”

The folks learned that in the United States there are more than 1.2 million firefighters, 75 percent of whom are volunteers. However, in rural areas like Gilpin County, the number of volunteers climbs to more than 90 percent.

TFPD is quasi-municipal, meaning that the department is a combination of paid staff and volunteers. There are currently 50 volunteer firefighters on the roster and a handful of paid employees, including the chief and a few other full-time and part-time staff. There are nine stations and 21 trucks and other firefighting apparatus.

A fire protection district is an area where citizens are taxed to provide funding so the fire department can do what they do. TFPD covers about 173 square miles, spanning Gilpin and Boulder Counties and including the Peak to Peak Highway between Black Hawk/Central City and Nederland. 4,500 residents are served, plus an influx of fifty to sixty thousand casino patrons and tourists who come on weekends and during the summer.

Jennings noted that the biggest fear is forest fire, although there have been none in the district for the past 150 years. “It’s a young forest, but there is lots of fuel. A couple of weeks of warm, dry weather can make a change.”

What can a TFPD volunteer expect?

The work is varied and challenging, including responding to wildland fires, structure fires, traffic accidents, back country rescues, and teaming with other first responding agencies when needed.

“We have a small number of calls a year,” Jennings advised, “but they are diverse.”

Serving at high altitude can be hard on the body and on equipment. Steep, winding routes, unpaved roads, and limited water supplies make it a challenge.

“You can see crazy stuff or sit around for days and days with no calls,” Jennings admitted. “It can get tiring when the pagers go off at 3 a.m. Sometimes you save someone and really feel you’ve made a difference. Other times, it doesn’t go well.”

The Chief was honest about what it takes — dedication, a positive attitude, and commitment to training.

“This is a real fire department. We have real fires. You can get hurt, it is a dangerous job, but we have tons of safety factors in place. We want to make sure you’re trained.”

He assured the attendees that no experience is necessary; TFPD will provide all training and equipment. He also acknowledged that everyone has family and job obligations and said TFPD works around those commitments.

While folks consumed hamburgers, they shared their experiences. Trevor Brown used to be a volunteer at a station on Lookout Mountain. “I’m interested in helping the community, and also maybe helping lower insurance rates for everyone,” he offered.

Jeff Frisch has been a volunteer since the beginning of 2014. “It’s been a great experience,” he reported. “I like helping neighbors.” He related his experience responding to a small, lightning-sparked fire in Golden Gate Park Estates several weeks ago.

Chief Jennings revealed why he decided to make firefighting a career. He became a volunteer in his late teens and had done volunteering for a number of years. It was during the 911 terrorist attacks, when he helped at the World Trade Center in New York City, that he decided to make the transition from volunteer to professional.

Jim Crawford, TFPD Board President, said, “I’ve been with Timberline for eight years and have served as a volunteer for 31 years. It’s been rewarding; I wouldn’t give it up for anything.” He serves as health and safety officer in addition to his Board responsibilities.

Jennings made note of a vehicle extrication training exercise coming up on September 27 from 8:30 a.m. to 4:00 p.m. in the parking lot of the Gilpin Community Center. The public is invited to observe. This major event will involve students from several emergency responding agencies practicing a variety of scenarios, utilizing more than 15 vehicles.

TFPD recently opened two new stations, one in Rollinsville on Tolland Road, and one in Golden Gate on the corner of Highway 46 and Smith Hill Road, where they hosted open houses this summer.

Training takes place every other Tuesday and Saturday. See timberlinefire.com for training schedules and applications.

END_OF_DOCUMENT_TOKEN_TO_BE_REPLACED

Benefitting the county, schools, and much more By Don Ireland   This year marks the 30th anniversary of casinos opening in the former little mining towns of Black Hawk, Central City and Cripple Creek, Colorado. In those early years, smoking was allowed inside ... END_OF_DOCUMENT_TOKEN_TO_BE_REPLACED