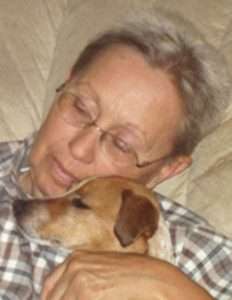 Diana Smith of Nathrop, CO passed away on June 11, 2016 at their farm home. She was born on December 5, 1947 in Black Hawk, CO to George and Mary Gulliksen. She graduated from Central City High School and then the Parks School of Business.

She met her husband, Delmar Smith, while they were both working at the Jefferson County Airport near Broomfield, CO. They were married on September 6, 1969. Together they purchased part of her family’s ranch in Gilpin County near Black Hawk, CO in 1972 and built their own home and several out buildings, and raised cattle and horses.

Diana worked as a professional secretary for several years, and was also a professional dressage instructor and horse trainer for 20-plus years. She also was the Gilpin County Deputy Assessor for a short time.

In 1988 they sold the cattle and horses and started the business of raising Alpacas. By 2013 they owned over 50 alpacas and paco-vicunas, and Diana was a member of several different animal and fiber groups.

They sold the Gilpin County ranch in July of 2014 and bought a small farm of 60 acres in Chaffee County, southwest of Nathrop, CO.

Diana was a hard-working farm girl and loved all kinds of livestock, including pigs, cattle, horses, dogs alpacas, and paco-vicunas – not as fond of cattle as the others. She had various magazine articles written about her work with horses and alpacas.

She loved Jeeping on trails in Colorado, especially in Gilpin and Chaffee counties, loved shooting different types of guns and was a very good shot. Diana was an excellent spinner and knitter, and loved by many in the fiber business. She also enjoyed walking and looking for chippy’s.

Diana is preceded in death by her parents, and brother John Gulliksen. Left to cherish her memories and items she made with animal fiber, is her husband Delmar Smith of Nathrop, CO; her sister Betty McMillian of West Alexanders, OH; Inez Harmes of Lafayette, CO; Sandy (Ken) Fairholm of Clearfield, UT; sister-in-law Joann Gulliksen of Silt, CO; uncle Al & Julie Wright of Golden, CO; and several nieces and nephews and their children.

Per her request, cremation was chosen and no services are planned, but a party for friends and family will be held at a later date.

END_OF_DOCUMENT_TOKEN_TO_BE_REPLACED

Where the dead get to tell their story By Jaclyn Schrock On Saturday, August 21, the Gilpin Historical Society held their annual Cemetery Crawl. Tickets allowed the shuttle of hundreds of guests from the Teller House parking lot to the Cemetery. Depending on v... END_OF_DOCUMENT_TOKEN_TO_BE_REPLACED