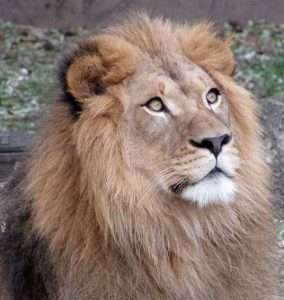 Tobia, a two-year old African Lion, joins the pride at Benson Predator Ridge and hopefully will be romantically inclined

African lions are a Denver Zoo icon and one of the first animals you see when you enter the Zoo at Predator Ridge, the sprawling rotational exhibit that houses the big cats as well as hyenas and African wild dogs. And soon you’ll get to see one more—a two-year-old male named Tobias, who arrived in mid-December by way of Buffalo Zooat the recommendation of the Association of Zoos and Aquariums’ Species Survival Plan (SSP).

Following a mandatory 30-day quarantine period, Tobias will start exploring other areas of Predator Ridge. And once he is comfortable in his new home, he will begin introductions with our three female lions and serve as a possible mate for three-year-old Kamara and six-year-old Neliah. Assistant Curator of Predators Matt Lenyo says the process is going well and hinted at the potential for some exciting news in the near future.

“Tobias is already showing signs that he’s feeling right at home at the Zoo—he’s acclimating to his new surroundings and participating in training sessions with his new care team,” said Lenyo. “If all goes well, we’ll hopefully have a successful match with at least one of the females, which could mean lion cubs within the next couple years.”

According to Vice President for Animal Care Hollie Colahan, Tobias is just the right fit for Denver Zoo, and could play an important role in zoos’ collective efforts to maintain a healthy, genetically-diverse population of African lions, which are listed as “Vulnerable” by the International Union for the Conservation of Nature.

“Lions are among the most iconic, high-profile species in zoos, and they act as ambassadors for their wild counterparts, who are facing increased threats and decreasing numbers,” said Colahan, who also serves as the coordinator for the African Lion SSP. “Tobias’ genetics are valuable for the SSP because he doesn’t have too many relatives in zoos and no relation to any of our females. We hope he continues the success we’ve had in recent years bolstering the size and health of the population of lions in zoos.”

The African Lion SSP began in 1993 in response to a declining number of lions in AZA-accredited institutions, but has turned a corner over the last several years, leading to an all-time high number of lions in zoos—more than 370 animals across 105 facilities. Earlier this year, under Colahan’s leadership, the African Lion SSP received the SSP Sustainability Awardfor accomplishing the AZA’s goals for a healthy population and top-quality care for lions.

Within the next couple of weeks, Tobias will start exploring the various areas in Predator Ridge, both behind the scenes and in the exhibit’s main yards, where he’ll be visible to guests. Be sure to follow us on Facebook and Twitter, and subscribe to our YouTube channel to find out when and where you might be able to catch a first glimpse of Tobias!

END_OF_DOCUMENT_TOKEN_TO_BE_REPLACED

Benefitting the county, schools, and much more By Don Ireland   This year marks the 30th anniversary of casinos opening in the former little mining towns of Black Hawk, Central City and Cripple Creek, Colorado. In those early years, smoking was allowed inside ... END_OF_DOCUMENT_TOKEN_TO_BE_REPLACED