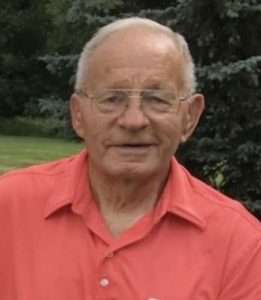 David Russell Zancanella passed away on Sunday June 28, 2020. He was born on March 22, 1930 to Tony and Jennie Zancanella in Russell Gulch, Colorado.

Dave enjoyed growing up in Black Hawk, Co. with his brothers and sisters. After graduating from High School, Dave worked for the Rio-Grande Railroad before going into the Army in 1951 where he served as a diesel mechanic in Italy during the Korean War. After returning home from the service he went to work for Coors Brewery as a bottle line mechanic and worked there for the next 36 years until he retired, 1990. His mechanical expertise was well known by many and he worked on many cars and other machines for friends and family over the years.

He married June McCool Nance in 1976, and they lived and worked in the Golden area until 1991 when they moved to Montrose, Co. They then moved to Grand Junction, Co in 1993 and lived there until 2003 when they moved back to the Front Range and lived in Berthoud, Johnstown, and Loveland, Co.

After moving to Montrose, Dave enjoyed helping his brother-in-law Ray Hutt with work on his ranch in Ridgway, Co.
Everywhere he went he made friends with all of his neighbors and was always there to help with anything they needed.

He was preceded in death by his parents Tony and Jennie, his sisters Virginia (Dell) McLaughlin  and Marguerite (Jim) Chase and brothers Clearance (Alice) Zancanella and Gene (Verna Mae) Zancanella, niece Berdina Kay Kohankie, and his grandson Todd Peeples.

END_OF_DOCUMENT_TOKEN_TO_BE_REPLACED

Where the dead get to tell their story By Jaclyn Schrock On Saturday, August 21, the Gilpin Historical Society held their annual Cemetery Crawl. Tickets allowed the shuttle of hundreds of guests from the Teller House parking lot to the Cemetery. Depending on v... END_OF_DOCUMENT_TOKEN_TO_BE_REPLACED