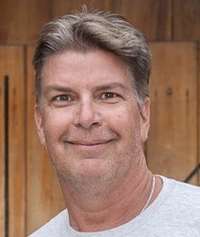 It is with unimaginable sadness that the family of David Rush Hitchcock announces his passing on Wednesday, March 18th, 2020 in San Clemente, Ecuador. Born in Atlanta, GA on June 27, 1969, raised (mostly) in Louisville, David became a man of the world. David graduated from the University of Kentucky in 1992, with Lexington being the breeding ground for lifelong friendships and the love of bourbon (which by law is only truly made in KY). Following the Grateful Dead around the country with friends cemented the need for travel, adventure and wanderlust. Settled in Colorado for many years, David had the unique ability to seek, and find the best in everyone he met. His love for his brothers and sisters in the High Country and Timberline Fire Departments formed a bond that cannot be broken.

“Hitch” was a teacher, friend, mentor, leader and so many other roles (insert your favorite here). Riding his Harley across the US, Canada (and maybe Mexico), even drag-racing that Harley and becoming a member of the 100 mph club, was a passion for David that enabled him to realize his credo of “Live Free.” He truly believed in order to live your best life, and be the best person you could be, was to “Live Free.” Live free of regret, live free of bias, live free to love, live free to change your course in an instant and then rock that change.

David was an entrepreneur at heart; first in grade school by selling his Halloween candy for profit at Christmas, selling grilled cheese sandwiches at a Grateful Dead show (made with an iron in the parking lot), and being “that guy” in Ecuador (“I got a guy who can…”).

Moving to Ecuador put him on the path that led to the love of his life, Eida Galud Espinoza Villamar. Being a big kid himself, David didn’t have children, but he lovingly supported Eida’s family and fell head over heels for her grandson Axel.

David’s mother, Libby Rush of San Clemente, Ecuador, father, David L. (Mary) Hitchcock of Wake Forest, NC and sister, Lisa Campbell (Fred) Safrit of Sharpsburg, GA are devastated by the loss of David, as are his many friends and chosen family all over the world. A small funeral was held Thursday, March 19th in Ecuador, but memorial services will be scheduled in the US and Ecuador in the near future. In honor of David, hoist a glass of bourbon, smile your goofiest smile, hug your neighbor, and give a toast to one of the best men around. You’ll be able to hear the clink of the ice cubes from above…

END_OF_DOCUMENT_TOKEN_TO_BE_REPLACED

Where the dead get to tell their story By Jaclyn Schrock On Saturday, August 21, the Gilpin Historical Society held their annual Cemetery Crawl. Tickets allowed the shuttle of hundreds of guests from the Teller House parking lot to the Cemetery. Depending on v... END_OF_DOCUMENT_TOKEN_TO_BE_REPLACED